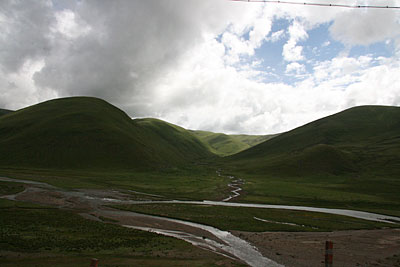 decision while I was still lying in bed covered by the puffy duvet that protected me from the cold night air. Last night I was still uncertain whether I should stay longer in Litang and wait for the sky burial that is said to take place tomorrow, although this would mean two more nights here. I brooded over the matter while sipping a soup that was so rich of onions that mosquitoes within the radius of two miles kept off me as long as the effect lasted.

I’ve become convinced I’ll say goodbye to Yaseku, Litang and its grassland, forsaking the possibility of witnessing the burial here. What decided me was the thought you can’t take a promise for granted here. With hindsight it was a correct guess, because no sky burial ever took place on that Monday.

The minibuses to Ganzi go a long way via Xinlong along a secondary road that joins the two branches of the Sichuan-Tibet highway. I’m going to leave the southern route and start the exploration on the northern, less beaten route.

The landscape initially consists of more grasslands forming beautiful scenery of green mountains and occasional black yak hair tents. We stop in sight of a big gathering where horse races are being held next to a camp of white tents similar to the one in Litang. At 3 pm we have a lunch break at the town of Xinlong . Although there is a considerable Chinese presence, the real soul of these towns is truly Tibetan.

At some spots the road passes under a canopy of colourful prayer flags or is flanked by banner-carrying poles that make up an atmosphere of festive religiosity, but also communicate a sense of  incumbent danger as these are the artefacts required to ingratiate malevolent spirits or ward off the perils of the road. 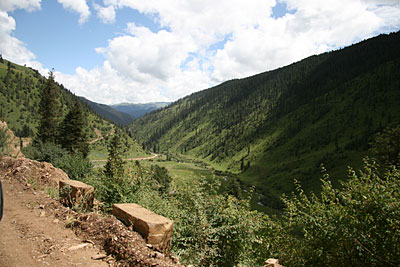 The stream alongside has indeed frightening rapids and craggy mountain tops start to appear. The suspension bridges that span the gorge are invariably covered by stripes of fabric printed with prayers and holy quotations. The last stretch that leads up to Gazi is set in the vast plain of its valley bottom. The fields are a gorgeous palette of different colours, according to the various crops and their stages of ripening.

Finally I find myself steeped in the extraordinary setting of Ganzi. The bright light of the evening sun lends this already lively place even more vitality. From the bridge my gaze follows the river downstream and is magnetically attracted upward by the backdrop of marvellous mountains, preceded by foothills cultivated in terraces. Behind me lies the bustling town and its noisy traffic.

As for accommodation, the best picks have already gone and I have to put up with a grimy hotel along the river with at least clean bedding, although the shared toilets are another kettle of fish. I suspect it’s not authorized to receive foreigners as there is no Latin alphabet sign nor am I not asked for a passport to check in.