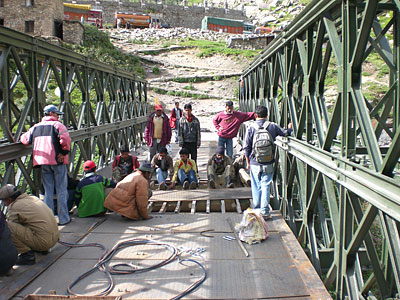 13 August - I have rested beautifully in the village guesthouse. The inhuman driver also looks fresh, if ever he stopped being so, even after his 15 hour driving shift on these extraordinary roads. At 6.30 am we start again after tying our luggage on the roof as usual. The passengers have partly changed and so has my seat unfortunately.

Last night I let the conductor have me in unawares and without reflecting too much on the consequences I agreed on a change of seat. My beautiful seat n. 14 that sided the aisle and prevented me from seeing either wing of the vehicle has become n. 1! Now I'm sitting next to the driver with unobstructed view on two sides, front and left.
However, the ride starts quietly almost on the valley bottom through villages that start going in the humidity of the morning, something that strikes me after the aridity of Ladakh. Another difference is a Hindu temple that sticks out with its characteristic Sahara.

We get in sight of an iron bridge and several vehicles stand motionless. At the other end too I can see waiting cars. I get out, have a tea, then go to see the reason of the hold-up. They are replacing iron plates that constitute the bridge's surface, all by work of arms and hands. The workers drag the tremendously heavy plates, push them with their legs, propping with their arms to the bare metal structure under which the water flows gurgling. Then come those who screw the bolts and the welders. No protection, nor gloves. The large team isn't all at work. It seems that only a few active ones are taking the initiative under the gaze of many more. Half an hour goes by, an hour, then an hour and a half. All waiting. Seven more plates are missing and at the rate at which they proceed, I reckon we are in for several hours. On the contrary, all of a sudden, the vehicles on our side are told to move, even if the last plates are only placed on the bridge skeleton. In fact out of caution we are asked to walk across and we get on board on the other side. We have still to wait half an hour to get our passports registered at the police check-point.

From here the road starts to climb. I think to myself that it's only 76 km to Manali and there can't be more passes to cross. Nevertheless, the bends follow one another, at each curve the bus front on my side juts out from the carriageway and seems to throw itself in the void of a valley that gets further down below us. Now that stream of whitish water, full of debris resulting from glacier thaw, looks like one more track of beaten earth plying the sides of this valley, an effect of the smallness given by our altitude. The crossings with other vehicles go on, and from my seat n. 1 I watch them without censorship. But closing my eyes in these critical points, as by magic, I find myself out of the danger I feel. 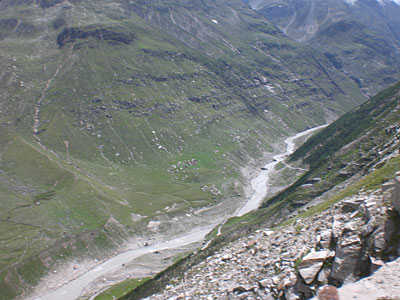 The road keeps climbing. At crossings it's a huge satisfaction to feel the security given by the mountain side when the other vehicle has to steer its course on the edge of the cliff to get past. But it's not always so, and several times we have to push our wheels to dangerous distances from the rim that I often see broken, fractured, splintered.

The road goes up and up. Teams of people are at work for the upkeep or rather the improvement of the worst sections. They spread layers of gravel obtained by breaking the stones piled in heaps, with blows of the mallet. Men dressed in rags, sometimes with mouth and nose wrapped in a kerchief as a rudimentary protection against dust. The broken stones are carried in buckets, then scattered. I don't see any tools used even for spreading the gravel. The hands of these crowds of workers cost less, are worth less, and perform more, given their abundance. Their traits are not from these regions, nor are the faces. The BRO, executioner of these damn roads, hire staff from far away to employ them seasonally, accommodate them in tents during the night. Another sign of Indian internal migrations.

At a sharp curve we hear a cry from behind. A sack has come undone from the luggage rack and has rolled down the mountain side. The owner gets off to retrieve it because it has luckily stopped against a boulder. We keep going up toward the pass. The mountain slope is less impressing now, but at a narrow bend we are stuck with two other lorries and we have to go backwards with the whistle to get out of the deadlock and give way.

We are now nearly on top and from the pass a fog is flowing over from one valley into the other. The altitude of Rohtang La is 3,978 m. We are now in the milky white of a thick fog of clouds lit by the sun. The visibility is poor. I see emerge and take a known shape some beautiful pine trees, but then vanish into the thickened whiteness. Beyond the road I can't see a thing and this blissful unconsciousness is pacifying. A fine drizzle sets in. We are held up in a queue of jeeps of Indian tourists coming up from Manali to see the pass. I don't know what on earth they could have seen in a weather like this, but I don't pity them. 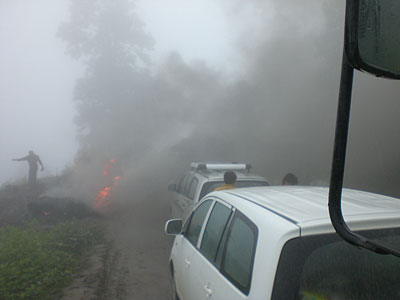 We stop, held up. Some worker have lit a fire of brushwood on the road margin, and its flames tear the fog, but without dispersing it. The landscape looks like the entrance to Hades. We proceed a little. In the fog I glimpse tens of workers, men and women, heating up bitumen on these fires and once it's hot pour it on the road surface in gusts, smearing their hands and the rags they are wrapped in. The fumes and the odours, the figures in the fog make this a scene of eternal convicts.

We move forward, but soon after we stop our descent. When we start again, we realise what was the reason. Some military tug carts, a team of soldiers... then in the whiteness appears the ominous outline of a lorry that has gone off the road, horribly capsized. It's gone out of the narrow track, upturned and stopped against a tree. We pass it as it is, with its four wheels in the air, in mute silence. Nobody dares utter a commentary: before us is what seems like a memento mori, an eloquent warning for us passengers.

We go down the line of the clouds and charming lines of water come into our sight, as well as spraying waterfalls across the rocks at whose base the vegetation is lush. Manali is a big centre for Indian tourism. Around it forests of marvellous green conifers provide a natural embrace. At the entrance into the station a thankful applause breaks out for the driver's skill. I myself had secretly taken a shot in admiration.

I learn that the road to Delhi is closed for a landslide and my plane is in only 48 hours... A wager against time and the monsoon rains starts now. I'm not anxious because I'll wait to see what will happen, but my thought goes to this point from time to time during this evening in Manali. I take a room in a hotel in the higher part of the new centre, beyond the squalid camp of season workers.

Old Manali is more touristy and more frequented by foreigners, while the centre reveals a specialisation for Punjabi tourism. I started with that state and ideally return to it: I visualise the Buddhist wheel of a time that turns around. A fine rain starts that soon turns into heavy and lasting, and I ask myself what will become of the landslide-prone terrain of the road to Delhi.