5 August - We see the puja at an early hour. It's not really a collective ceremony here these days: a monk is praying alone in the room, while a child isolated in a separate closet is repeating his formulae and scans them to the sound of brass cymbals. The poor child gives me pity, so young and all alone. 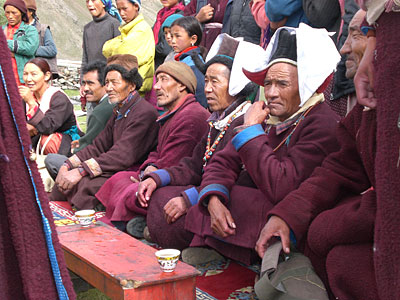 We walk back across the monastery plain to the houses. In the stream much less water than yesterday is flowing, but it's cold and on the higher peaks we can see that a sprinkle of snow has come down. In one hour and a half we are back. At the village we see a ceremony in progress, a Tibetan wedding with people in traditional gear. The soldiers too, Indians but maybe more strangers than ourselves in these regions since they come from other states of this vast country, have flocked in with curiosity and are surprised that it's all over in half an hour. They don't understand, if they think that in their Hindu regions, a wedding can last several days on end.

They don't know that in fact this ceremony hasn't started nor has it ended here. The bride is actually coming from Leh and is going to Padum. Along the way the convoy is stopping at every village to meet the residents, offer food and maybe gather gifts. We are to meet it several times in the course of our journey to Zanskar.

But, look! In the yard there is also a bus! We hasten to get our luggage back and ask for a lift to Padum. They say they have room and full of elation we tie our rucksacks on the roof. After half an hour we start.

As I review the passengers, I notice they are nearly all women in dark red Tibetan costume, with stone and shell ornaments, besides the headgear. A lady sports red-dyed hands and I surmise that it may be due to her job. In fact, at the first stop we find out what has happened to us: we didn't get on the public bus, the one we'd been waiting for days, but in the excitement of seeing a vehicle, we took the one that the yellow banner hanging on its side says what it is: Association of Zanskar Women, returning from an exhibition of handicrafts in Leh. 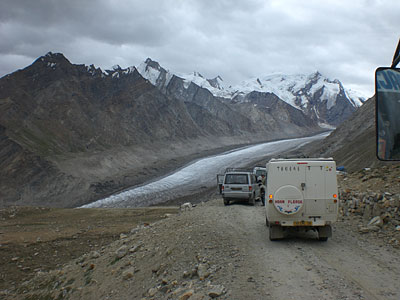 We trundle up to the Penzi La. On the long ascent the women want to stop several times to load sacks of dried cow dung, reserves for the hard winter. Albert and I also lend a helping hand to drag the sacks up the steep slope, then hoist them and tie them on the roof. Then comes the time of dairy produce. Along the road there are several seasonal settlements of shepherds living in stone huts, together with the cattle. They transform the milk into curds, then into fresh cheese, and slice part of it to dry in the air, obtaining a sour-tasting cheese.
No sooner do our women see the shepherds than they get excited, demand a sudden stop of the bus, rush out of the vehicle, bargain, swap, buy, then come back to their seats with their plastic jars full. In their uncontainable rush, they forget everything, even my presence on the passage to the bus door and jump over me as if I were a sack. To make her crazy way shorter, one sets her foot on my knee, leaving a pretty stamp and making me burst with laughter.

The thing is that these women have a different feeling from ours as far as body contact is concerned. Earlier, as I was watching the view, I found a drooping hand on my thigh: it was my neighbour's. Without malice. And Albert too is serving as a sofa to his neighbour, sleeping ensconced on all his side... 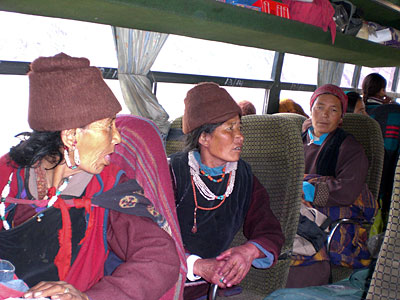 We drive over the Penzi La that everyone salute with glee. Soon after we see the fantastic snaking tongue of the long glacier that winds out from frozen farness. My neighbour's now frightened with the sheer precipice from the road and mimics a bus tumbling down, but I reassure her taking her hand. I too adapt to their easy tactile contact.

We arrive at 6 pm, after the puncture of a tyre and leaving each of the women at their respective village. We find a room in a pretty hotel in the village, where I meet the three Italians of yesterday. As if memory were a superfluous gift, the man starts his lesson on the local peoples again, repeating the same things he said yesterday. But now I needn't cajole him and I cut short with the excuse that I'm hungry.