I'm waiting in the yard for departure time, at 4 pm. I have made arrangements to go by shared taxi to the Pakistani border, 30 km away from Amritsar, where every evening a closing ceremony is held. A huge crowd follows the event from either side of the border supporting their respective nation with cheers that a speaker calls for from his microphone, while the guards emboldened by such encouragement march up and down with military paces so exaggeratedly ample as to look funny and farcical. From either side the guards go as far as to shake hands before locking the gate for the night and lower the flags.

The heat of this place is dreadful what with the weather and the multitude of bodies sitting on the stands. Soon sweat drenches my T-shirt and my light trousers in the wait under a relentless sun.

The pressure of the throng struggling to secure a seat on the steps was tremendous. I reckoned I would come out with bruises. As soon as the gates were opened there was an wild movement that made me lose control on myself and I felt dragged around by the sticky bodies and led by the crowd's jostles without being able to detect who they came from in particular. I could hardly wring out my bag that was sucked in by the bodies, caught in the crowd. 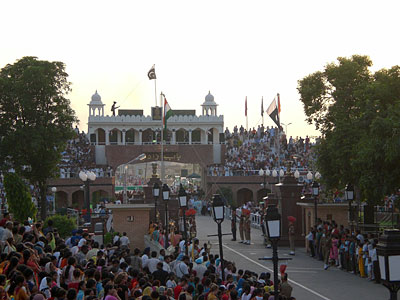 I met a nice Newzealander couple in the bus and their Scottish friend. They warn me against the Srinagar to Leh highway, which they describe as the most frightening experience they've ever lived... I already knew, but I'm not comforted by being reminded. They say that the bus they were travelling in sent small stones rolling down the slope in the curves and they advise against travelling on the driver's side.

Likewise, I was not reassured at hearing from a careless Gagan that a blast occurred today on a tourist bus in Srinagar. Several people were injured and 6 died. Gagan announced the information to me this morning, relating the relevant news, far from realising I would be somewhat affected, even if I don't want to show it. He was telling me that the last blast in Kashmir dates to just a fortnight ago in a market.

In the evening I take leave from Gagan after a last visit to the shrine, walking in the opposite direction on the bridge because the waiting would be too slow, now that the long queue reaches the pavement around the pool. I also say goodbye to my Chilean room mate, whose Jewish origin he confirms when I ask him about his little Spanish-sounding surname. I move to the station in a rickshaw with a little Japanese bloke who is always laughing. My train leaves at 11.50 pm. I have a first tier sleeper that I only use to lie down, but I hardly get to sleep. Rather my thoughts move from the Srinagar explosion on that tourist bus, to the Kargil road by the infamous Zoji La pass.