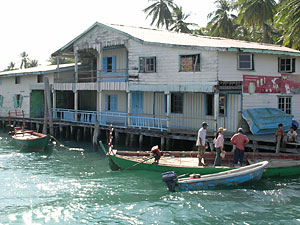 8 December – It is now my last stop before the flight back. I'm in Trat, Thailand, and about to get on the bus to Bangkok airport. Getting here from Sihanoukville was a jolly good adventure.To be true, Sihanoukville must have a spell about it, because thinking back reaching it from Kampot was a very bizarre trip, too. For the sake of symmetry, then, it is fair enough for the trip out to have gone as it went.

But I'll proceed in chronological order and relate the trip into Sihanoukville first. That happened in a share taxi leaving from Kampot. In my travel experience I have never, ever seen a car loaded like that. We were three adult passengers on the back seat, in addition to a child packed I don't know where, but the driver apologetically warned us that the child was only paying half fare, and he would have to stuff in another adult, who blocked everyone's movements when she squeezed in.

On the front seat there were two young monks entangled around each other, but the cherry on the cake was the driver himself sharing his own seat with someone else. He had made him place his feet between the pedals and from behind I could see the very funny scene of a two-headed driver, not knowing which one was playing with my life; then an arm was going out of the window, but again you couldn't tell which head it belonged to, and I was just satisfied with poetic vagueness. As if it were not enough, the boot was brimful with boxes of goods that prevented the door from closing. It had to be kept in place by ropes secured to the bumper.

The tragicomic situation lasted two long hours, or about 100 km on the road. At a stop I made the mistake of moving to take a breath and ward off cramps, but my neighbours took advantage to gain terrain and sprawl, reducing me permanently for the last 20 minutes to a posture that would have been good enough to cripple me for life.

Conversely, the departure from Sihanoukville was by sea, on a boat that is rumoured to be designed for river sailing, but has been adapted to maritime use. This isn't very promising for a start, but it's not all. The morning I left a fierce constant wind was blowing, but I didn't care in the least until I saw a very choppy sea and white-caps as far as the eye could reach, from the elevated promontory while a motorbike was taking me to the harbour. During the one-hour waiting time, I observed a team of workers load a heavy cargo of cereals into the hold, then all over the prow, sack after sack. Little carts were wearily pulled along the tattered wooden pier against a whipping wind, then parked level with the boat and unloaded on the shoulders.

We were eventually let into the cabin and after a long manoeuvre we took to the open sea. We didn't take long to understand that the wind was a sea-changing force that bloody day and rocked the boat in all senses as if it were a toy, heaving it, sometimes dropping it on the water surface with a sinister thump and such a violence to make me worried for the safety of the hull, loaded as it was with all its cargo, human or otherwise. The torture for the passengers' stomachs and minds didn't last long, luckily: only one long hour, after which the wind abated or the sea started to be protected between the islands and the coast. Consequently the navigation proceeded in the best desirable way, so that I was able to climb on the cabin roof, just where violent splashing billows and waves had previously raged at the start of the voyage.

In Trat I tried having dinner in the street food stalls that offer cooked dishes. Never had this experience appealed to me in Cambodia, I even considered them rather disgusting for lack of hygiene: suffice it to say that the dishes are washed by immersion in a bucket of water under the counter. Yet here they were rather inviting and I was happy with the try. A Scottish man offered me a pink-shelled egg that had drawn my attention, saying he had tried it and loved it. To my palate it tasted anything but "delicious", so after eating a bit I concealed the rest.

Tomorrow I will have time to walk around the market and may buy a hammock… I will then take the 2.30 p.m. bus to Bangkok new airport just in time for check-in.I appreciated the quiet orderly Thai scene in this town, altogether different from what I left behind in Cambodia. It makes me feel like coming back soon to discover the country where so many people wear yellow out of affection for their king. 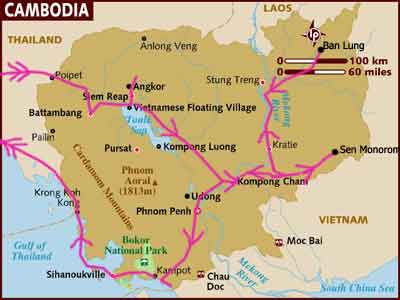