10 December - I have got to Phnom Penh after the longest bus ride that lasted well 12 consecutive hours, that is to say all day yesterday, on roads that were the horrible dirt Ratanakiri ones at first and became more acceptable as I went, even if they started to be beset by traffic near the capital. We risked a collision with stray domestic animals more than once. They don’t feel the danger and blowing the honk repeatedly doesn’t help much. It’s not easy either to anticipate their path and sharp braking was sometimes inevitable to avoid a head-on crash with a carefree strolling cow. I admired a fascinating sunset on rice fields near the city, this time with rosy and purple, then red hues.

I am now in a pleasant modern café downtown, on a first-floor terrace overlooking the handsome river. It has some foreign customers now and they are playing Christmas music that sounds to me rather out of place. I can feel all the difference form the place I was in until yesterday; firstly for the considerable presence of foreigners, some of whom have rather odd shabby looks. They seem to taint the image and the essence of tourism, to bring out the slothful and degraded nature of some eternal globe-trotters (I nevertheless acknowledge that my work ethics prompts me this contemptuous thought). Moreover an international influence is felt in the presence of large well-stocked stores that only a big city can offer.

It is funny to see Christmas decorations in this Buddhist land. They are altogether devoid of meaning, barring the basely folkloric and abjectly commercial purpose. But isn't it so for so many of us in the West nowadays? We have a Christmas made of presents and luncheons with friends and relatives, but without almost us knowing what it’s all about.

I have heard these considerations ever since I was in primary school and considered them trite, but never as now do I understand their real scope. It may be because of my recent reading a book on the character of English people: the writer dealt of Christmas in the chapter on Festivities as of a festival whatsoever, not a Christian holiday. Then I asked myself: which primary school master would talk disapprovingly of a commercial Christmas today as I used to hear at school? So we are left with our Christmas that is tinged with Nordic flavours, red colours and white beards, reindeer and fir-trees, whereas this holiday ought in fact take us to the barrenness of a middle-eastern landscape, not any warmer than our European winter sometimes, but how far from all the imagery invented by those same ones that killed Christmas... I am content with going back with my mind to the simple Nativity Church, to that star on the ground, for all my need of images to be met, for my thirst of Christmas to be quenched at any time of the year...

Well, I am now relaxing on the terrace of that café overlooking the Tonle Sap River bank. Below me lies a noisy and trafficked street, just beyond a rather dirty promenade, crowded with people that see to keeping the required amount of litter and grime, then the rippled waters of the wide river. If I look further south I can see the point where this waterway joins with the immense Mekong to make it even more gigantic. 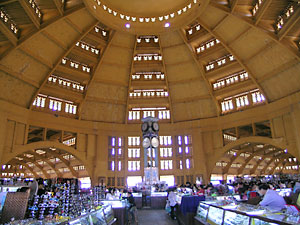 Today was a day devoted to markets - not very relaxing to be true, but interesting. This morning I went to the central market. It is housed in an interesting art nouveau style hall. I took shots galore at the goods and the sellers; all were very colourful and typical scenes. In the afternoon I went to the so called Russian Marked, lured by the possibility to find brand clothes at bargain prices, but disappointed to find items with awkwardly counterfeited brand tags and above all without the original quality or fashion. There were at least other handicraft items of some interest, the first ones that I have deemed worth buying in this country. However I didn't decide on any purchase for lack of real inspiration.

11 December - I have decided to spend the second day in the capital on a bicycle saddle, defying the chaotic traffic that rules in the streets. You could talk of an almost perfect anarchy of cars but above all motorbikes and rickshaws moving at moderate speed, but in every direction. You are often confronted to vehicles coming the wrong way, others that crop up without heeding the give  way sign, those that drive in a no entry lane, but this chaos is tempered by low speed that allows for a direction change and an escape.

Today I have tracked some public and private buildings from this city's colonial heritage: the railway station, Le Royal grand hotel, some old ministries and villas. I haven't neglected the museum either, itself housed in a charming early last century building.