6 December – I have come down from Mondulkiri hills and am updating my travel log on other hills, actually the remotest you could find in this country. I am in the dusty town of Ban Lung, nothing but a crossroads of two wide dirt streets with little traffic but plenty of dust. You know when a vehicle drives by because a cloud of red powder rises and gradually settles after passing through your nostrils, getting into your eyes and smearing your clothes. 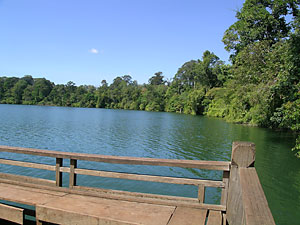 The journey up to here was tiresome: 6 hours by bus with two short stops, plus a “technical” break for the passengers who needed it to get down the bus and find a secluded spot on the road side to relieve themselves. The journey was not comfortable due to the road condition, that in spite of not being utterly disastrous, didn’t allow a smooth progress. At least today’s driver showed more consideration to us passengers by driving at the speed that the road condition permits, unlike yesterday’s crazy bloke who sped all the way down to Snoul and made me feel as if in a tumble dryer. In Snoul I got off the bus and I would have liked to while away the waiting reading my book, had not a French lady got hold of me and started a drawn-out conversation without the possibility of an escape.

From Snoul I got to Kratie, where I spent the night and had to let my body recover without doing anything throughout the afternoon. There was also a shower of rain, a remnant of the Philippines typhoon, but the water was not enough to wash away the filthy town market. On the contrary, if gave rise to a slime that coated over vegetable waste on the ground and added an unhealthy touch to the rather uninviting scene of sellers offering the land’s produce and meat in hampers along the street. In some baskets I thought I saw black eggs, maybe fermented or processed God knows how.

My stay in Kratie came to an end this morning after a ride on a hired pushbike around the wide river island that can be reached by ferry from the bank. The island is very large and cultivated, with lovely peasants' houses and sandy beaches all around. To make a loop round its perimeter takes an hour at least. At 12.30 I took the bus again to come where I am now, in Ban Lung.

7 December – I went to the volcanic lake today where I also swam; it is a perfectly round crater full of water with the forest looking on from every side. After a well deserved nap in the shade, I went on to see other waterfalls on my hired moped.

To get there I crossed an old rubber tree plantation where some people were performing a strange operation. They were sticking the extremity of a cotton thread in the trunk at a certain height and stretched the other end much further down: the thread was immediately covered with lattice beads. They were then collecting the thick old threads, already covered with dark clotted lattice to do God knows what. The very trees are dark with coagulated sap over a large section of the bark. This doesn’t seem to be a systematic exploitation of the resource, but rather the locals' gleaning. I also drove through an acajou plantation.The waterfalls were pretty and steeped in forest vegetation. 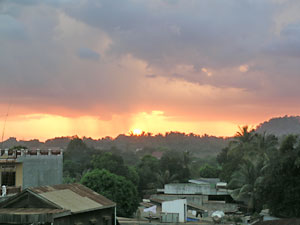 Tonight again sunset was a remarkable experience. Layers of livid colours were picked out by streaks of light, flares and blazes that surprise the observer in that he does not understand  what could be the stratification of clouds that makes it possible for sunlight to reach them and create such effects. Man’s lowly worm-eye's view has to be content with accepting things as he sees them, no more than a beautiful mesmerizing painting.

8 December – I'm writing while having breakfast in a restaurant in the open air, the only decent one of this place and far better than the pig sty where I had a chicken soup with smashed and chipped bones the first night. The meat bits were rather like joints, judging from their toughness and cartilage; moreover the meat was barely cooked. The venue itself reminded of a workshop, with coarse block walls, a dirt soil on which the tables were arranged, some of them dining-room pieces of furniture stridently clashing with the rest, others simple desks with chairs. But that's what the late hour had allowed me to find.

On the contrary, this place is rather pretty. Of course the menu is to the local taste and there isn't anything sweet to be had for breakfast, so I made do with a fried egg with some really nice crunching sesame bread. The vases of blooming orchids, an absolute wonder, are dancing in the breeze curling and uncurling around the metal wire securing them to the marquee. They are just emptied coconut shells, filled with bark chips, and here the ethereal plants thrive as if by miracle.

8 December evening – I got to a village on my motorbike that is 40 km from the main town and is reached by an occasionally bad road, strewn with deep holes that you sight when it is already too late to avoid them if you're not driving at an adequately low speed. You risk having a breakdown if you fall with your moped – and you are bound to repair it if it gets damaged – on top of the possible and probable injuries that would result from the accident.

For all that, I got to that village and I had the impression I had reached the boundaries of the wild world. I had this sensation once more when I took a little boat to sail up the nearly invisible current, nonetheless extant and powerful, of a big river, a thoroughfare of the jungle 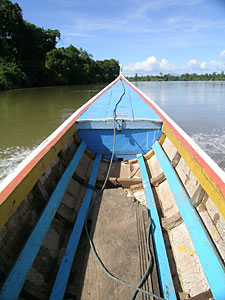 that borders it at its banks, thick as a barrier. That reminded me Heart of Darkness narrator's sailing up the river and I fancied I was in the same situation, with only thick vegetation scrutinising and controlling me from either bank. Only I didn't feel the impending danger that threatened that voyage, but rather I felt as a pioneer eager to discover and blessed with an easy serviceable way. To tell the truth the flimsy boat seemed to hover in a precarious balance, made as it was of a tiny hull sliding on the water surface.

The village I got to boasted a tribal cemetery with the wooden statues of the deceased in the middle of a thick forest. It could be the cue to spark anthropological speculations, maybe on common elements in human nature to be found even in very far away cultures. But I don't linger in the thought, I don't have suitable tools and knowledge in this field.

In the evening I admire yet another sunset form the pagoda where an interesting rite related to the Buddhist festival of these days is in progress. Under a marquee a carpet is covered with dishes full of offerings in petals and flowers, smelly joss sticks send a thread of smoke in the air, monks and nuns are prostrate on the ground, some visitors get someone to take a snapshot of them in front of the gilt Buddha statues, a voice, shrill on account of an excessive amplification, is chanting in the background and giving blessings. A young monk with a blank gaze, wrapped in his bright orange robe, is sitting on a cement bench smoking a cigarette. What could he be thinking at?

From this knoll the view reaches out to the hills thick with forest, and in the increasingly dim light they take on bluish hues that become faded in the distance. The colours of nature are a telltale that I am in another continent.