3 December – Before leaving for the hills I can devote some time to the town and above all its river that has been living into the new day for some hours. Fishermen's skiffs are moving on the waters and picking in the nets little fish flashing in the sunlight. I watch them from above the bridge arch. They make up as many colourful and folkloric spots. On the bridge vehicles are wheeling loaded with goods for the market and I can see a motorbike with tens of chicken tied to either side of the back wheel; then two motorbikes with cylindrical wicker baskets on their luggage rack full of young pink little pigs.

The bus leaves for the long climb to the hills at 9. All proceeds well up to Snoul, the road is good, we are travelling at a good rate and in spite of there not being too much leg room, I arrive in a good condition.We then have a short break and the passengers get off the small bus to munch at a snack, but I turn my attention to the beautiful unknown fruit that I take a liking in discovering in its new shapes, colours and flavours.

Soon after hitting the road again, I find out that the road has become dirt and for a long stretch in a rather poor shape too, with several potholes that the driver continually tries to dodge, without however saving us from jolts and jerks.We have another break in a village half an hour before arriving, where a big venue shows off its walls lined with large planks of beautiful timber. We often sight lorries loaded with valuable logs, a sign of the inexorable plundering of tropical forests, looted by rogues with corrupt officials' connivance or active involvement. The hill forest is really handsome; you can see it degraded along the road at times, to recover all its virgin richness further off.

The reddish track cuts through it as a dusty wound, opened at every passage of a vehicle. I imagine it wet and muddy after the rains, all the more bleeding and lacerated. I could also see rubber tree plantations with bowls collecting the secretion from the slit trunk.I arrive at 4.30 p.m. and all in all it has not been an impossible day. I am at a short distance from the Vietnamese border, but there is no road, only forests. The temperature is different as a result of altitude. Humidity makes you sticky in the lower regions, but it is here replaced for a light and almost fresh breeze. I spend the evening reading and overhearing the conversation of a group of young people from different countries in the background, accompanied by a constant flow of beer. 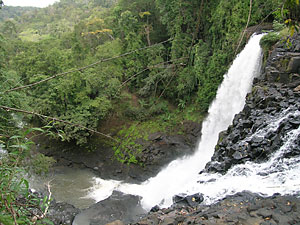 4 December – I didn’t mean the day to go like this, but I let the events drag me little by little, or rather the road. There are waterfalls in the forest around Sen Monorom that you can get to by motorbike. The trouble is that the road is in an awful condition, a horrendous track in the jungle, often narrow and bumpy, rent by dreadful ditches and strewn with deep holes. All advised me to not drive a motorbike on it, since one needs to be experienced in this sort of terrain. It is however possible to reach the first village on the way to the waterfalls at approximately 10 km from town, a quarter of the whole way.

I therefore hired a moped and hit the road with just 2 $’s worth of petrol in the tank. After passing the first village and being reassured about the road condition up to then, I realised that "appetite comes with eating" and I drove on towards the unknown, well keeping in mind the warning, or threat, that I had been given this morning: some enterprising tourists ventured onto this road and got stuck with a breakdown or a skid and their rescue cost them dearly. Another thought that racked my brain was scarce petrol supply, as the ride was to have had an altogether different scope.

But once on the road I couldn’t turn back, so went on. I asked two people for directions, and also to be reassured on the possibility of petrol filling: once I’d got a positive answer, nothing else could hold me back from getting into the adventure head first. The road had awful sections: I had to balance between terribly deep ditches of earth and wet mud without slipping; jerks and jolts; occasionally the wheel skidded without nonetheless causing the bike to fall over…

As if it were not enough, the menacing sky since the morning got darker and darker and gave way to an outpour which I took shelter from under a tree on the road. The storm – it is said to be a typhoon from the Philippines striking Vietnam these days – increased the road difficulty, which became very slippery clay in the last 500 m. The wheel didn’t have the slightest grip on the soil, what with having a scarcely carved tread and being all caked up with mud.I could figure myself on the ground any moment with the motorbike over me and some spike stuck into my leg or a severed tendon. The waterfalls were not far at least, and they were really worth the while. I actually felt very proud with succeeding! I didn’t have much time and leisure to enjoy them, because the rain was an impending menace and with it a worsening of the track condition that I could imagine, if the worse come to the worst, all like the last exasperating stretch.

Other motorbike drivers were telling me that when the weather is really bad they use mud chains and they take 4 hours at least. I took over 2 hours to drive just under 40 km from the waterfalls back into town and I was exhausted. Along the way pretty thatch huts with domestic animals, but especially the forest at either side of the brick-red track was the protagonist of the day.I chat away the evening with an nice talkative expatriate Englishman living in Phnom Penh; then with nice landlady Madame Deu’s son. 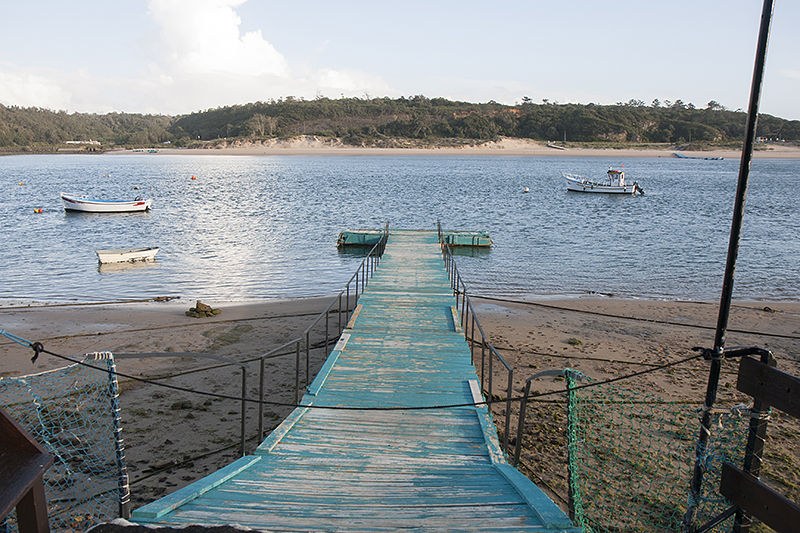