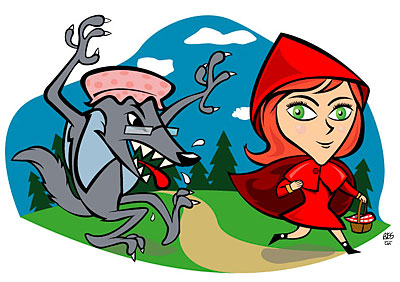 My Syrian friend Alaa, who likes writing stories, sent me an interesting tale. It's the story of Little red hood as told by the wolf's grandson. According to this version, the wolf is the good character, with a deep aversion to preying on other animals and contrary to eating meat, which has prompted him to become a vegetarian living on grasses and berries. Layla (or Little red hood), on the contrary, is an evil character, leading a dissolute life in the forest, treading the grass, plucking flowers and destroying the natural environment.

The wolf tries to lead her on the straight path, but goes too many times unheard, until eventually he decides to appeal to Layla's grandmother to give the child guidance. But the grandmother, who is evil too, seeing the wolf at her doorstep, grabs a stick to hit him. In self defence the wolf pushes her back and makes her fall and because she hits her head on the bed corner, she dies.

The wolf is sincerely sorry about what has happened in spite of him and anticipates that Layla will be all the more sorry now that she’s bereft of her loving grandmother. So he disguises into the old woman's clothes and waites for her in the bed. When Layla comes and realises who is actually lying in her grandmother's bed, she runs out of the house and starts telling the story we all know of a wicked wolf who devoured her grandma and tried to eat her too.

It is an interesting tale that shows how the truth is not often unique and that history is in the hands of the winner, or the most cunning one. Italian writer Pirandello pushed further the concept of multifacetedness to skirt folly, when he suggested the annihilation of our own self under the attack of thousands of points of view expressed by those who see us from outside. Our very personality is broken into a myriad selves and finally destroyed.

I can’t help but recall the scenes of Col. Gaddafi shown on the telly a few days ago. While the rebels are fighting for every inch of land they've wrenched from his authority and Nato strikes are raging in Libya's skies making havoc in its cities and among their civil population, the leader was standing in an open roof car driving through the streets of Tripoli, acclaimed by hordes of his supporters.

We've all seen the ludicrous interview given by Mr Gaddafi on the Bbc, when he rejects the journalist's suggestions of a country split in half and out of control, by saying that the West can't understand the situation and can't judge what is going on. We all remember Mr Gaddafi's reaction when the interviewer tries again to bring round to him that the country is in a state of war and asks what he plans to do about it. After the most hilarious chuckle, Mr Gaddafi dismisses the interrogative with a cheeky "Bud… whad is de quesdion?", that nearly puts off a very impassive Michael Caine.

He may not be the leader every country dreams of, but I ask myself what right has a foreign coalition to decide which side to take? If Mr Gaddafi still has his supporters and entire swathes of territory with him, how could the bigwigs from overseas have concluded that the events can’t be called a mutiny any longer, but a just revolution that deserves foreign backing instead of repression from the domestic establishment. If violence is condemnable in any case, even when it comes from a government whose duty it is, among other things, to keep order in a country, the paradox is that Nato is using military force too.

We’ve heard enough from the paladins of freedom and democracy who keep on resorting to all too easy excuses to sanction their foreign intervention abroad, when huge economical interests are at stake. If they want to be consistent with their purported goals, the foreign powers should have put pressure on the Libyan leader to start a peaceful democratic process that would determine the future of the country. Or else just acknowledge to the public that it is a share in Libya’s oil they’re after. We are not unquestioning children to be lulled to sleep while listening to Little red hood.