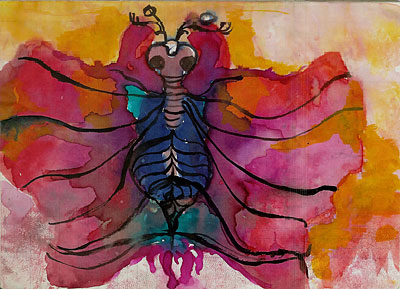 This image comes from the drawing album I had when I was in primary school. It was mostly girls who kept an album, but a few boys had one too, in which they asked friends, schoolmates and relatives to draw something and write a thought dedicated to the album’s owner.

Throughout year two, we had a replacement teacher called Paola, who was young and pretty and came to school driving her tiny metalised grey Autobianchi A112. Apart from being a teacher we all loved, she could paint beautifully with drawing inks.

When I first saw one of the her paintings, I was literally shocked by its beauty. No wonder I can still remember what it was, although what comes up to my mind now is especially that aura of magic that surrounded the image and held me totally mesmerised.

The painting was a tropical night landscape, with lush palm trees intertwined with lianas in front of a glittering lagoon. The full moon was like a big gem studded in the middle of the sky and its whiteness seemed so real that you had the impression of perceiving its depth and dimensions. It was as if the moon stuck out for being painted in relief; and probably a little in relief it was, as the white ink has, unlike other colours, some texture to it. The moon’s splendour shone in the night over the vegetation painted in dark colours and cast reflections on the foliage. The scene was so real and so fantastic at the same time that I felt shaken by a flurry of emotions.

As a side note, I later associated the memory of this painting to the song Foreign affair, whose lyrics mention a lagoon and a tropical beach and whose melody sounds intriguingly uncanny. Even if the song scene is more likely to be set in broad daylight, its elements are enough to conjure up the old ink drawing and all its secret world.

I think I started my album precisely because I wanted to have one of Paola’s paintings too. And so I took an ordinary notebook (while my schoolmates usually had special padded albums) and asked Paola to dedicate a picture to me. If you open that notebook now, on the very first page there is this colourful butterfly, with the grid of the maths notebook showing through where the colour is lighter.

When I got the notebook back, I must say I was a bit let down as it seemed to me that my drawing was not able to stir all the emotions of the night landscape. Still the colours were so vivid and beautiful and even if the butterfly is a bit coarsely shaped, it was nevertheless a lovely image.

But that was not enough for me. I now wonder if it was Paola rather that her drawing skills that had really charmed me, then a little boy of 7. Anyway, I don’t know how I happened to have her phone number, but one day in June, after the school had finished, I picked up the receiver sitting on top of the two-grey rotary dial apparatus hanging on the wall and rang her up. I can’t remember what I asked her, but Paola was terribly kind and offered to pick me up one day and show me the drawing inks. 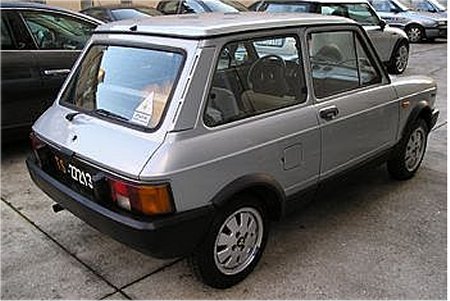 The appointed day she came with her little A112 and we drove across the town to her house. In the hot summer afternoon we were sitting at a table with the windows wide open and she was showing me how to paint with inks. She could use various techniques that allowed her to sketch, apply the colour with different brushes, diffuse it with water, or even blow through a straw to get a branch effect. I must have been in rapture observing her, seeing her paint, give birth to shapes and colours with the simple touch of her magic brush. Then she took me home leaving me a book as a present.

Drawing inks became my passion. I didn’t learn the techniques very much, probably even never tried to, but the fact of having those pretty flasks with different coloured caps in the drawer made me happy. No day passed without my imploring my mother to buy me one more little flask. And she indulged me until I came to own quite a few.

Once I got upset when I overheard her saying how enterprising I'd been with my teacher Paola, calling her at home and getting myself invited. The thought had never crossed my mind that my spontaneity could be out of place. Now the butterfly stands here to remind me of how happy Paola made me to give me her painting, showing me how to do it, but especially to let me spend that afternoon in her cherished company.