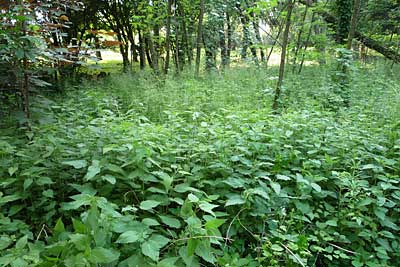 I had nearly finished mowing the lawn and was tackling the last part of the garden that extends technically beyond our property. In the first days the neighbouring field, which doesn’t have road access, used to be sown with maize, but then the aging farmer was barred entrance after a strife with the owner next door and probably he wouldn't have kept on farming it anyway. As a result it was left to go wild (fallow is the word, I think). Now after many years it looks like a patch of straggling forest with even dead trees fallen on one side and ivy and creepers climbing up the trunks.

Even though it's so wild it's really nice to watch from our side because it's natural and there are little animals and birds living in it too, like hedgehogs and slow worms. One year I thought of tiding it up a bit and spent days on end cutting the dead trees, raking away the brambles and then burning them on a bonfire and also cutting off the strangling creepers. Then in the matter of a few years it was back to usual wilderness and that's how it looks at present. 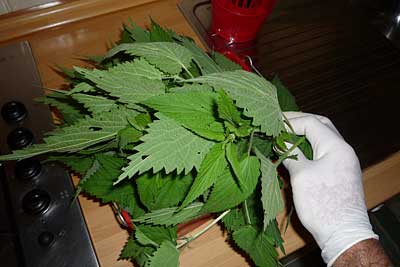 Having never been fenced off we have used a stripe as a buffer space that we've looked after so as not to have the jungle right at our doorstep. When I got to this 5 meter belt that I regularly mow, I saw that in the shade of our big beech tree there was a bunch of stinging nettles, their green fresh leaves still untouched by insects or the summer's black stains and I thought I could make good use of them.

So I searched for a recipe and up comes an enticing nettle risotto and nettle dumplings. After a shower I went down to the garden again wearing a latex glove and I started picking the tops with tender leaves and buds. The thin glove was not enough to protect my fingers and at first I felt the stings prickle me and inject their irritating liquid, but then the sensation stopped. I didn't realise it was because my finger had had been completely numbed until the following day when I felt an aching flesh with no sense of touch. 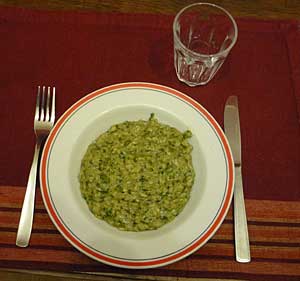 With due caution I washed the leaves and chopped them with the mezzaluna, adding them to the rice and onion. Gradually adding stock I got a delicious little organic risotto with a distinctive nettle flavour, no stinging effect included. And the gnocchi also came out nice, making the second of two nice dinners with strictly homegrown ingredients, or rather picked from wild nature.