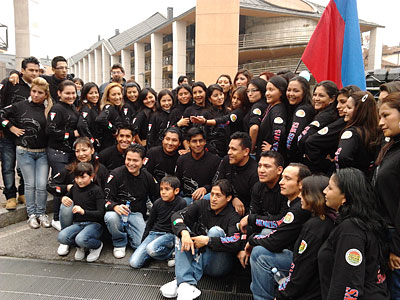 Just as I was starting to pull the house together after Saturday night’s dinner party, I received a text from Claudia. The message was about the dance parade due to take place the next day at half past twelve and I was reminded to attend.

My town is home to a staggering number of Bolivians, whose exact count escapes official statistics because up to not long ago a visa was not required of them to enter the country. Many arrived and stayed over the usual 90-day tourist period, so numbers soon swelled. Add in the fact that the phenomenon of Bolivian forged passports was not rare, so other South American nationals took advantage of the loophole to “legally” enter Europe.

Given such a massive concentration, folklore groups have been founded and now are part of the town’s cultural landscape. To be true, they don’t have as many members as in their country and the public responds timidly, but I imagine the dancers are justly proud to be the harbingers of their culture in a foreign land and stay at the centre of the attention for the few hours the parades last.

Claudia was not very clear about the occasion for the show, but I was free and I went to check out for myself. As I expected, 12.30 was to be interpreted as the vague time when people would start to assemble, but my sense of punctuality didn’t let me arrive more than 10 minutes late. Way too optimistic! Only a sparse group of people were gathered around a pick-up with baffles in Piazza Pontida. Nobody seemed to be in a flurry because of an imminent onset.

About an hour later I headed back to the spot and found the procession had already moved one block along the street. The music blared out loud and the boys at the back could be seen performing their energetic dance steps. I caught up with the group and spotted my friends dancing. It was not a large body, but the performance was heart-felt.

The grey sky above and the deserted streets at lunch-time were cheered up by the parade. Some windows opened as the march slowly passed by. I heard an African man behind me comment in a Bergamask-foreign accent: “I’m glad they’re here to bring some happiness to this town!”.

I thought “How critical!”, but then realised how much people must miss the vitality of their warm place of origin, away from their families and in a completely different social and cultural setting.

As the procession wound up in front of S. Lazzaro’s church, a priest on a loudspeaker invited the people in Spanish to get into the church for a blessing. It was then that I realised it was an Ecuadorian festival, San Simón, and the Bolivian dancers had been asked to enliven the celebrations.

The small church was packed. The priest called upon a lady to talk about her miraculous healing and she gave an expressive account of an illness and subsequent conversion to the unconditional love of Jesus Child. This testimony of faith was the worthy conclusion to a day of Latino passion and catapulted me to a different continent for a few hours.