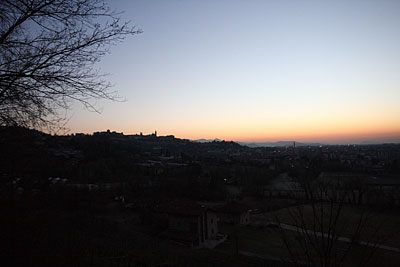 I absolutely love it in December when I go to work and I see the dawn in a clear sky. It’s one of the most beautiful natural spectacles, which I can enjoy only the couple of weeks around Christmas because it’s when the days are at their shortest. Today it was biting cold as I rode my bike, but I didn’t mind because I felt that since the town had not fully woken up yet, it was more to myself. During the Christmas break there aren’t even any school-goers around and the city traffic is reduced to a trifle, especially if compared with the hectic hustle and bustle before the holidays.

Funnily enough, I love working during what for most is the Christmas break because of this sensation of exclusivity. I get to my office when the daylight is not enough yet, and I’d be tempted not to switch on the ceiling fixture and start working just under the cone of light from the table lamp, and semi-obscurity all around me.

When I crossed the main junction at Porta Nuova, I could see the magnificent skyline of Città Alta under no direct light and slightly tinged by the tender hues of dawn. Only the gilt statue of St. Alexander glittered on the top of the dome and it was so bright that I thought it was lit from the inside. On the other hand, the remaining buildings looked as if they’d been steeped in an indigo bath but their outline was cut out against the most resplendent of azures. It was like a real-life nativity scene.

With my mind thrilled by this unique sight, I had a flashback and remembered the emotions I felt returning from an overseas trip. The recollection was muddled: I don’t know if it was that particular journey that had been such an intense experience or the sight of dawn from the jet plane. I’m not even sure which trip it was that came to my mind, perhaps it was a just sum of past travel experiences. I didn’t bother to unravel the threads of memories and get too analytical. What’s important, is that it all merged into the most pleasant sensation of beauty and recovered past.

I saw myself flying again over the fantastic mountains of what might have been Iran, and I felt impressed at their endless rugged expanse. The sun was just rising and about to send its first timid beams to break the icy coldness of the night. Hovering in mid-air and empowered by bird’s eye view, I felt an urge to be right down there, in the heart of Central Asia, as if the extraordinary experience I had just lived in Nepal (?) had only served as starters to whet my appetite. 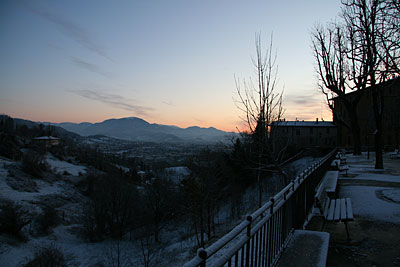 Or maybe my memory conjured up another one of my first returns when I felt so enriched by the trip that all I could expect was a hard time getting back to the routine and live days of not fitting in, still in shock for the things I’d experienced and disgusted at my usual world that I would see with completely different eyes. It is sickening to return to overflowing abundance when you have tried threadbare simplicity.

The past mingled with the present was such a powerful delightful combination this morning at dawn. I got lost in space and time, I levitated into wistful thinking feeling moved by emotions. Whoever feels more, suffers more – they say, but I wouldn’t change if it meant becoming indifferent to the world. And even the most common and repetitive sights may mean so much to us. December dawns rise every year on my beloved town which I see every single day, but they’ll never tire me.