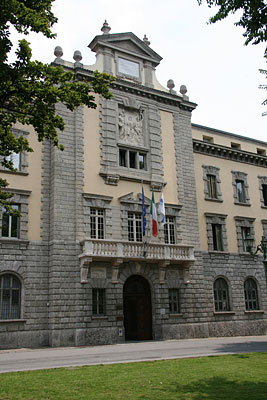 One of the first days, I was tipped off by an older colleague that it was of the utmost importance that I should clock in and out at the exact times, but what I did in between did not much matter. This comment shocked me, and I distanced myself from it. If this mentality did not reflect the attitude of the whole staff – I mused with a dose of disappointment – at the very least it was entrenched in the old guard’s behaviour and maybe contaminated the younger generations too.

In spite of all, my activity grew year on year, and I felt happy to organise it in the best possible way. Nevertheless, the work soon seemed rather drab to me. Apart from an occasional twitch in the organisation, the thrill of a deadline or some occasional creative project, I could take everything for granted because my tasks did not evolve.

Nor was any stimulus provided by the management to create something new, for the Chamber of commerce is not usually involved in designing and launching initiatives; at most it grants money. To be true, I did work on some interesting schemes which brightened my day, but at other times I felt a sense of frustration taking over me.

I remembered a nightmare I had before sitting the exam which made me ask myself if wanting to work in the civil service was the right decision. In it, I was going through piles of dusty tax returns at an Inland Revenue branch office and I felt oppressed by the moral burden of menial work. Now that I was in the post, in spite of a certain amount of creativity that I was allowed – rather than asked or even expected – to put into my work, my talents and skills did not find a chance to be put to good use.

I went through periods of despondency, surely amplified by personal reasons, but definitely made no better by the feeling of uselessness at work. I remember dreading Monday at a time: not only was I not going back to work to do what my heart desired, but I also thought that my job – the whole organisation I worked for, to be true – was a bureaucratic creation that provided no real services. It was an entity that served to justify itself for the most part.

The fault is in the system

Chambers of commerce in this country are not based on free membership. Every company is made to register and pay an annual fee, like it or not. Being a public body, the Chamber is run by a number of elected directors and councillors. However, two quirks of the system stand out: firstly, they breach a basic rule of democracy, i.e. their organs don’t stipulate a role for an opposition to the ruling faction. Secondly, employers’ unions sit in the board and it’s them, not the companies, who are the customary beneficiaries of the Chamber’s policies.

The companies don’t have much of a say, especially if they are not union members themselves. Since it’s the unions that contrived the whole system on a legislative level, why would they want to stand up for their companies and call for different rules of representation? Or even ask for the dismantling of the Chambers? They can get easy money from the private sector without knocking on anybody’s door. The Chamber of commerce sees to that, it’s written in the law!

How the money is spent, it’s up to the directors and the managers to decide. Some may go into worthy projects, but too much just keeps the employers’ unions going or feeds related organisations.

A further part returns to the companies themselves in the form of grants against specific investments. But I’ve often stopped to question this distributive policy and considered the high cost of levying a tax on all subjects in order to fund a small number of them. I can vouch that the procedures are carried out according to strict principles of publicity and transparency, but in practice a relatively small number of companies have access to these measures.

How I have changed

As a result, I have long since lost faith in what I believed to be the ideal job. A career in the... Read on