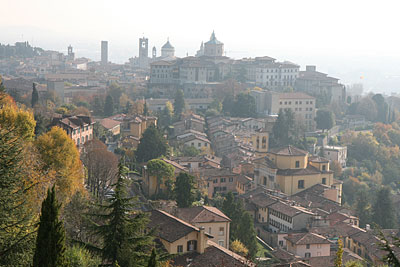 The inhabitants of Bergamo often joke about their town being a small place because they keep bumping into acquaintances or relatives where they would expect the least. This jocular complaint is inspired by contrasting feelings: a mild sense of oppression on the one hand, and on the other a welcome atmosphere of familiarity. Each will have their thoughts about which component has the upper hand, but I can only thank Bergamo for what happened yesterday as I went an inch from utter disaster.

I was holding a seminar for hotel managers at 3 pm which I had spent quite some time organising. It had not been an easy task to gather a reasonable audience because the first batch of invitations sent out to over 250 hotels had returned only very few replies. We sent a reminder, but in the end we had to pick up the phone and speak directly to the people concerned in order to convince them. The direct marketing was successful: by the end of the week we had about 60 registered participants and everything was supposed to go smoothly.

The day of the event I woke up to appalling weather. A strong downpour was unleashing on the town causing some streets to be flooded with muddy water. The temperature had sunk to an unheard-of low for the month of June. At mid morning, a few hours before the start, the storm seemed to be over, but the worst had yet to come.

Just when I thought I could sit back and wait until the start, a colleague phoned our office to enquire why we were holding the meeting in the same hall that she was using for the lawyers’ seminar. She had 150 people, we 60; she had reserved the room, we hadn’t. I don’t know what had gone wrong, but it just had. I could not lose a second, a solution had to be found instantly.

I was lucky to find the only other conference hall unoccupied – by sheer coincidence – and we emailed all the participants that the meeting would be at a different address. We put up a notice in the original place saying we were meeting at the new one. The only worry was that the number of people was slightly over the capacity of the hall and we would have to resort to extra chairs to accommodate everyone. But the bad weather, which I thought would be a problem, was now playing on our side because a few people cancelled their attendance.

I dread to think what would have happened if that colleague had not realised the error. But how could she possibly have become aware of it, given that she works in a completely different department of a big organisation? Here enter Bergamo to help. The lucky chance was due to the fact that her partner happens to be a hotel manager and had been invited to my meeting. Talking about his plans for the next day he mentioned going to a given conference room. The lady ruled that out because she knew she was occupying it, but it was late and they went to bed without checking the email invitation. But in the morning, he confirmed the information and the alarm was given.

I cannot imagine what would have happened if things had really gone wrong. At the end of the meeting I found myself speaking to that man and I suddenly realised he had given us the precious tip, literally picking us up from the brink of a catastrophe. So I thanked him and with a hearty laugh and a wink he explained how things had gone.

Only in a place where you are known and recognised by others are you not annihilated by an anonymous existence. You may find there is sometimes intrusion, but on balance there is a lot to be gained.