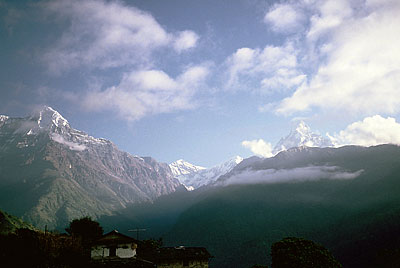 Last night I attended the show of a local festival whose theme are feature films about mountains. I was attracted by one title in particular, Marpha apples, because it talked about a remote Nepalese region, the Mustang, that I nearly visited.

During my trek years ago I reached the entry point to Mustang before turning off on a different route. All I saw there was a solitary police checkpoint, unmanned at that moment, but I was tickled by the glimpse of a grandiose valley opening a path into that sensitive area toward the border with . My gaze dug as deep as it could reach from that spot, but I hadn’t applied for the required expensive permit so I had to content myself with window-shopping. Nothing could stop my imagination, though, and I daydreamed about crossing into Mustang and walking towards unknown goals hidden among beautiful barren mountains.

But that was many years ago. Now things have changed profoundly for the whole Kali Gandaki region, as I first learned from a BBC documentary. It reported that now vehicles ply the road to the holy town of Muktinath, which at the time of my trek could only be reached after several days’ walking on mountain trails. There didn’t use to be a road, and goods had to be carried by donkeys that lumbered along the mountain routes. Alternatively, stalwart porters could be seen carrying unheard-of weights on their own backs. No noises, apart from the impetuous burbling of the streams below wobbly bridges.

The BBC reporter lamented that the environment of her trekking holiday had been completely different from the present-day situation. The quiet mountain villages were passed only by the wayfarers who spent time along that spectacular valley between the massif and the dwarfing mass of the Dhaulaghiri. The only possible shortcut was flying to Jomson, which I never envisaged because to me it amounted to cheating.

But now a road has been dug along the valley that allows the passage of 4-wheel drive vehicles, lorries, and buses. No more donkey trains or muleteers; gone forever the slow pace and the atmosphere that came along with them. Now people buy a bus ticket and in the matter of several bumpy hours reach their destination, visit the shrine, stay overnight and leave.

The radio programme made me realise that the changes were big and irreversible, but seeing the documentary on the big screen made them even more poignant. Prepared as I might have been, watching those images and listening to the narrating voice literally made me shed bitter tears.

The whole Kali Gandaki environment has changed greatly, as well as its economy and the living conditions. With the traffic there are hardly any trekkers anymore. The lodges, that once were bustling profitable concerns, lie now empty, forsaken by the travellers that came to enjoy the mountain trails. Now they go to the Mustang, at least until the road doesn’t open its way up there too.

The film gave a voice to people who have been differently affected by the opening of the road. Obviously, there are also advantages to what was named “progress”. Goods have become less expensive now that they are carried by motor vehicles, there is a more reliable connection to more developed areas and their facilities or services, such as hospitals and doctors. The apples that grow in the beautiful fields around Marpha at an altitude of now reach the city markets and the farmers’ income has benefitted greatly.

Maybe now there is hardly any need anymore to preserve the apples by making a liquor or by drying them in slices. Maybe insects don’t feast anymore among the packages of dried apples at night, as I witness in a dimly lit shop window. But, for that matter, there are no more unaware trekkers to buy them, because my Marpha is gone forever.