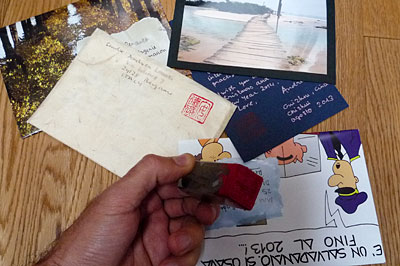 In the internet era Christmas cards have become a rarity. The young have not lived in the heyday of the post, and many older people consider it outmoded or too formal to send cards, but the main reason may be that they are rather inconvenient. Because you’ve got to buy one, write in good hand a well thought-out message parsed with punctuation and capital letters (an insurmountable stumbling block for most email writers), copy the address, buy a stamp, stick it on the envelope, and mail it. Compared to the click of the mouse required to send an email, this takes much longer, involves more commitment and more expense. In most cases it involves a process that is not accomplished in just a few hurried minutes in front of the laptop screen.

But receiving a Christmas card is much nicer than an email that is read as quickly as it was written, and then is destined to be deleted leaving as little trace as the effort it required when it came to life. Luckily, I still have a few friends who I still exchange cards with and this year I even received one from a former work colleague from England who I used to correspond with. It was indeed a good surprise.

However, when I wanted to reply, I realised I hadn’t recorded her postal address in my contacts archive. I thought I might get hold of an old letter from her in the drawer of my old post where I have stored tens of letters received from friends over the years. Although I have never reread any of them, I like to think they are hard evidence of my life, friendships and experiences. It is reassuring to know my past is there to refer to the day I decide to rake it up, or when I need to look up a reference. This being the case, I could find two old address books and a couple of relevant letters, but the address was not specified in any of them.

Rummaging in that deep drawer, I came across a letter from an American friend who served as a Peace Corps volunteer in Jamaica. I reminisced my first non-European trip to visit her, the tropical night heat with crickets sounding like little bells, the flowers and the lush vegetation, and the amazing wild beach we spent two days at. After my return I stopped receiving news from her and we completely lost touch. I only have my memories and those letters to remind me of her and of the Caribbean island.

Back down on earth from daydreaming, I focused on the envelope I was still holding in my hands. My friend had used the page of an illustrated magazine, cut it out with rounded edges and glued the sides to form an original envelope that materialised all the attention that she wanted to direct to me. It looked artistic and I thought I’d copy the idea for my Christmas cards. It just took one failed attempt to realise the flaps had to overlap neatly in order not to leave any gap in the envelope. I then selected a couple of interesting pages from a stray magazine, another rare item in the present times, and set out to produce a batch. On one page was the Statue of Liberty (which I picked solely on the grounds of being a whole page illustration), then there was a tree-lined Autumn time alley, and finally a cartoon – they turned into as many colourful envelopes. If the space for the address was occupied by colour you stuck a roughly torn patch of light-colour paper which looked and serveed like a comics speech balloon.

Inside the envelope I slid another self-made Christmas card, but this is not my latest invention. It is a cardboard on which I glue one of my photos, and stamp the back with the red-ink Chinese seal of my name. All things considered it took a long time to make my cards, but the result was the expression of my creativity and I was happy to devote time to this little task. After all, it is just once a year and only for very few friends.

Eventually, if you are curious to know how I  recovered my friend’s postal address… well, I asked her by email.