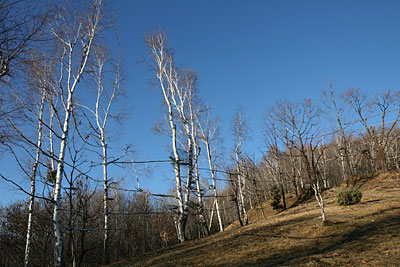 We met as volunteers working at the same night shelter but we found out that we had already been colleagues unawares when both of us had served, albeit at different times, at the same institution in Jerusalem. It usually didn’t take long until she talked about her volunteering in Israel with someone new, and it must have been like this that we discovered common ground. She was rather chuffed when it came to the topic of her yearly stays of over a month each time.

From that first day, whenever we did a night shift together we often talked about common acquaintances, the staff, the patients, the atmosphere in Jerusalem, and life in that big house. I promised one day I would show her the photos I had taken the summer I was there. Now there will be no more time for that…

Once we attended a meeting held by the bishop, and when the talks were over she insisted we go and meet him. “Your Excellency – she addressed him in a confident tone when she was right in front of the bishop, who was intent on nibbling the snacks – we have both served as volunteers in Jerusalem!”. The bishop found some words of praise that the circumstance called, but I was too amused at her boldness to avert my thought from her impromptu self-introduction.

I don’t like playing cards, but she was a keen player and enjoyed those scopa games with the guests and the volunteers. Then, before going to bed, she would go out on the balcony to relish the last cigarette of the day. In the morning it was her who came upstairs first, often a few minutes before the 6.45 wakeup time. Her loud voice, a bit hoarse because of old age but probably also because of smoking, would resound in the still, dark room. “Good morning! Ah, I see here you’re all still sleeping!” The remark sounded sarcastic, coming from the one who had stoically defeated slumber, while we others were still lying in bed inconclusively. I chuckled with a guilty feeling like a child found fault with by a grown-up, and instantly sprang out of the warm blankets.

In the half hour that followed she was impatient for all to leave, until we were finally ready to lock the house and she could return to her home, not before puffing on her first cigarette. For that day her duty was accomplished. She packed two volunteering services in the same day, the afternoon at a hospital, and the night at the hostel. In this way, she said, she wouldn’t need to think about it anymore. She seemed to inflict that chore upon herself out of sense of duty, but I admired her for her tremendous good will, her activeness and her commitment. And at her age to boot!

How many years had I known her? Five, six? I like keeping this vagueness about her, her age and other personal facts. Whatever she wanted to tell me I accepted without inquisitiveness. My image of her is like a self-portrait painted by brushstrokes every time we happened to meet at the night shelter, month in, month out. She didn’t have a family of her own. She mentioned a nephew who liked travelling, but alas, was not into volunteering. I felt gratified by her implicit appreciation.

The next time I was counting on telling her I had received a Christmas card from a Jerusalem nun we both knew. But there will be no more time for that…