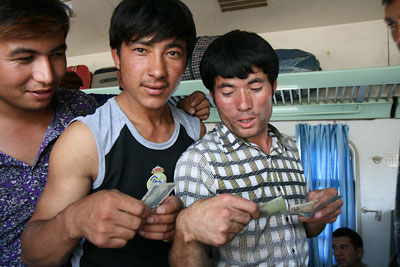 I was at the supermarket checkout about to pay for my groceries when the man who had left moments earlier came back holding the receipt in his hand. He pointed out to the cashier that there was an error in his favour, as the shopper had been scanned twice but a pack of ravioli had not been typed. The man dutifully wanted to set the accounts right and paid up the small difference. The thing impressed me and prompted me to put my hand on my heart and ask myself weather I would have acted in the same way. Probably not, to be true, and yet I couldn't deny that the man's behaviour struck me as commendable even though the amount at stake was a trifling one.

Then I nuanced my standing and admitted that if I were to deal with a traditional shopkeeper, chances are that I would have pointed out the mistake. In fact, I remembered an episode that happened when I was at school. I had taken on the task of buying an English language exercise book for the whole class, and went to the bookshop with the money collected from my schoolmates. The shopkeeper inadvertently gave me one book more, a fact that I only realised when I got home. The next day I returned to pay for the extra book, and the owner was so touched that he wanted to give me a small gift in thankfulness. That time I felt proud of myself, and in due time much above the baseness of another schoolmate who bought a novel for all and stuck fake price tags on each book to earn on the difference, until he got unmasked.

On the other hand, a supermarket has a more abstract identity, and I tend to consider it as impersonal, so I might not be fussy about not acting to the best of my principles. By this I do not mean that I would steal anything – I have never done so – but passively accepting an error the supermarket staff originally made would not be such a great deal. Maybe if that were to happen, I would think of all the times I bought items that were not worth their money and clear my conscience in a bid to be quits with the management.

Brats are notorious for pilfering in shops, but I have never done. However, I wonder whether age has made me more pragmatic and I have lost some of my innocence. In fact, once I happened to be treated as a shoplifter and to be true I gave the hypermarket good cause to, at least as far as appearances were concerned. I had bought a set of whiteboard markers that were utterly useless, as a matter of fact they were nearly dry! I made a complaint and was told I had no right to a refund or a replacement because I had lost the receipt. Since I had to buy more stuff that day, I decided to seek my own justice.

Seeing a man return a small amount due to the supermarket spurs reflections on my stance to honesty.

Once inside the selling area I opened the seal of the plastic bag and slipped another package of markers into it. Inexperience gave me away as I made the most stupid mistake of hiding in the changing rooms. When I was nicked at the exit and still refused to pay because I was adamant I had been cheated in the first place, the security guard sent for the carabinieri, for a couple of euro's worth of goods. I explained to them what had gone on, and finally was made to pay for the item, but I got my revenge when I gave the useless markers to that guard as a mock present with a sneering comment, and he was taken aback speechless. I understand that although he acted with obtuseness and was unlucky to come across someone as pig-headed as he, he was still paid to do that hideous job.

We all like to consider ourselves honest, but our personal standards of honesty vary. I suppose that even those who commit atrocious crimes or are the masterminds of frauds find in their heart of hearts a justification that allows them to get away with guilt and remorse. I was however happy to have seen that man return to the checkout with his receipt, just to remind me what is right.