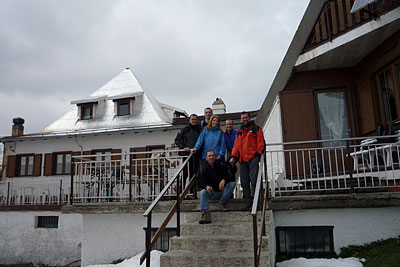 Yesterday, Andrea U. and I were undecided whether we should join a small group of other associates who had planned to hike to Piani di Artavaggio. The destination was not particularly appealing as the way is a dirt road that has nothing of the classical mountain path; the itinerary unfolds in verdant mountain scenery, but it’s got no dramatic features such as the rocks or cliffs of wilder valleys. As an alternative we’d given a thought to climbing up to the Coca hut, but the hike being considered a demanding one, I was reluctant to embark on it given that I had to be in town by 7 pm. Just before leaving I then talked Andrea into joining the others, and we both were glad we did.

The walk is an easy one, with a drop of only about 800 m from the hamlet of Avolasio up to the pyramid-shaped Nicola hut at nearly 1900 m. With practically no snow left along the way, meadows dotted with thousands of white and violet crocus flowers, the spring was apparent everywhere, especially at lower altitudes where wild cherry trees in blossom stood out in the darker woods. 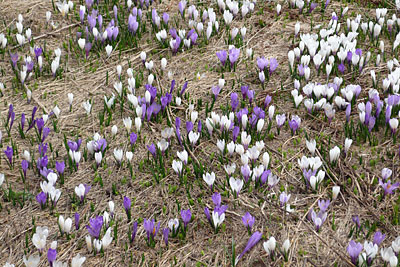 We reached the ending point some time after 1 pm and ate our lunch on the terrace, but the sun was covered by clouds, so the air became quite chilly. We took shelter inside where the wood stove was burning and we got warm by the fire. Pierre and Mario (who else?) had already been sitting at the table and had eaten a hearty meal of polenta with cheese, sausage and mushrooms.

Altogether a very pleasant day in the cheerful company of Elena accompanied by the five of us.