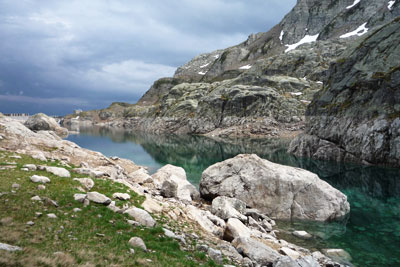 The weather forecast wasn’t promising at all. Probably it wasn’t even reasonable to leave for a two-day hike, but we mustered the guts to make our plan come true in possible adverse conditions. After all, I’d received rehearsal training on Friday when I paid a visit to a friend with the clouds already clustering in livid masses over the horizon, and by the time I decided it was high time I cycled back home, big drops of rain had started to fall which soaked me through in a matter of minutes. I put it down to experience, of course.

The idea was to hike along the five lakes trail starting from just over Valgoglio and come back on a loop the following day, after spending the night at the Lago Nero refuge. Looking back, the hike didn’t take place in ideal weather as the colours would have been brighter in the sunshine, especially those of the charming alpine lakes; however, it would be unfair to complain. We caught a sprinkle of rain on the way up, but there was a footbridge by the dam and I waited under it until it passed.

At the Cernello hut we opened the winter room and spread on the mattresses for a nap that lasted until we were startled awake by the clang of a metal bar crashing on the ground. We had slipped into sleep remembering the solitary bear that just a few months ago was repeatedly sighted on these mountains and sowed disarray among the population, so the picture came back with laughter when we imagined the animal had been attracted by our honey and tripped over the bar. Anyway, we were glad to be woken up or we would have risked being stranded here for lack of enough daylight hours to reach the refuge. 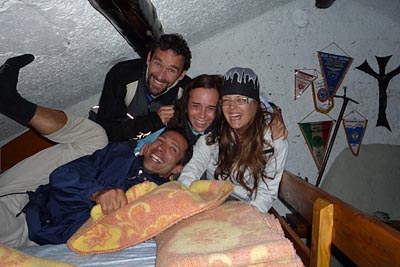 We then set off again touching the different lakes, most of them barred by dams built about 100 years ago to bridle the power of abundant water. Now they make a precious source of clean energy. Lago Nero was not true to its name, as the only rays of sun made its water take on incredible hues of blue.

As we turned our back on the last dam of Lago d’Aviasco we were confronted by a disquieting darkening sky and rain-laden clouds getting dangerously near. I was particularly anxious not to be caught in the rain and a possible storm. The memory of the one I experienced in Iran at 3200 m was enough to urge me to walk as fast as I could and keep the others close behind. Maybe they didn’t share my phobia, but at least they thanked me for saving them the wash of their life. We’d barely set foot in the refuge when a heavy rain started to come down in buckets.

Giuliano joined us at 8 pm after he’d returned from his spearfishing day in Liguria. He had climbed up the direct path in the driving rain, after motoring all that distance. 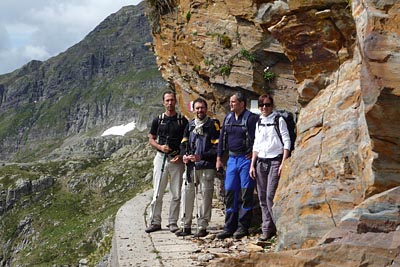 The night in the hut was a lot of fun, the five of us as the only guests. The impetuous refuge manager is quite a character, talking out in the loudest voice ever even if the hearer is just a meter away and gesticulating wildly to get the message through visually. He’s a retired maintenance engineer so he knows quite a lot about the fascinating functioning of the local network of hydraulic works, but his manner of speaking and not listening is rather wearing, especially when it’s tranquillity in the mountains that you’re after.

Day two was a long hike at altitude and a descent to the starting point. Rain started falling lightly when we were in the wood, making this the third time I’ve come to Valle Sanguigno in rainy weather. I’m starting to think this is the reason why nature is so lush here: the new ferns undergrowth is just amazing. We got into our cars and started going down. Tireless Giuliano leaves first: he must have a hunch he’s not yet made the most of the weekend and is planning to join some friends for a wild boar grill tonight.