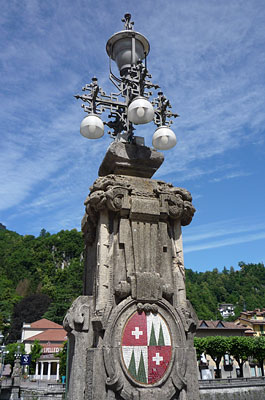 I was not attracted to the idea of hiking up to that same place in the mountains I’d already been to twice this year, but in my friend’s mind this was no negotiable matter. It had to be Lago Barbellino, past Rifugio Curò, at all costs. However, rather than go by myself to some other place that failed to crop up and really inspire me, by Saturday night I had practically convinced myself I’d turn up at the meeting point for the sake of company.

Instead, Sunday morning saw the coup de scène when the alarm clock went off long after the sunrays had started flooding my room without really managing to wake me up. Maybe I was struck by sudden inspiration precisely because I needed to take it easy. Just as I was struggling to bring myself back to wakefulness, I resolved to mutiny: I’d cycle up Valle Brembana on the path that was inaugurated a few years ago.

I set out with enthusiasm on the beautiful sunny day and reached old Ponteranica train station just outside town. The cycling path was in fact made on the route of a disused railway that in the golden age of rail transport ran up the two main Bergamask valleys. Inaugurated in the first decade of the 1900’s, it was later abandoned for road service in the 1960’s, to the bitter regret of present-day public administrators who have come round to the fact that with levels of road traffic worryingly high the little train would have been a useful asset. A light railway has been revived on the old Valle Seriana route up to Albino and there are plans to do likewise in Valle Brembana, but before the trains start to run, bicycles are making good use of the track. 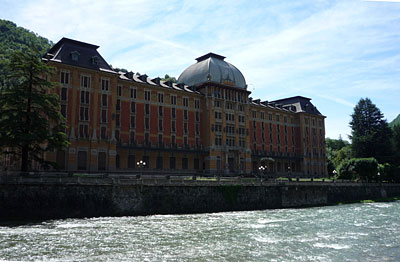 Now the little stations that dot the line are rather decrepit, except the prettiest one in San Pellegrino that was restored and repainted, next to what was once the Grand Hotel. This imposing building, destined to host upper-class spa goers, has been standing here with no clear destiny for decades, gradually sinking into a state of disrepair without finding anybody courageous enough to invest huge sums money in a high-risk enterprise. It appears that its plan is not adequate anymore to present-day hotel-management standards and that the spa era gone by, the resort does not exert enough attraction power on affluent tourists.

On the other hand all have been unanimous in recognising to this grandiose building a symbolic role that epitomises San Pellegrino's past. And indeed it does take the mind back to the glorious times of the resort, when the aristocratic society revolved around its world-famous water and spa. The Grand Hotel constitutes the most outstanding piece of Art Deco heritage in this locality that boasts plenty of other noteworthy examples, first of which is certainly the marvellous Casino. 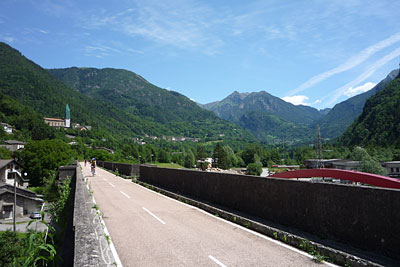 After stopping its activity in 1979, the Grand Hotel was acquired by the local provincial administration, but by now it’s been looted of its luxurious fixtures and furniture by successive auction campaigns. It could now be called the ghost of its former self and it has an aura of eeriness about it.

The rail track then goes on to Piazza Brembana, passing on the original bridges, through the narrow stone-carved tunnels – now adequately lit and paved – and amid the beautiful scenery of mountain meadows and woods. I reached the terminus, about 40 km from Bergamo, with a sore bum due to the hard racing saddle, had lunch and started the descent. I must have cycled about 90 km in a beautiful ride all in all, but by the time I reached home around mid afternoon and I felt as if I’d run a stage of Giro d’Italia!