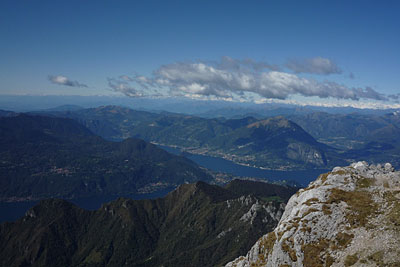 Brioschi refuge lies in an extraordinary position, being perched on top of the Grigna mountain at . As if its location were not enough, the mountain overlooks some below and when the weather is clear the view sweeps from the to the plain. Open year round, at least at weekends, in summer and even in winter, it makes a coveted destination for hikers in every season, although in cold weather those who reach it must be technically apt. There is an impressive picture of the snow forming a shell around the building after a blizzard.

On Sunday I set off with Paolo quite early. The walk is long with an ascent of nearly , but the reward keeps coming all the time with excellent panoramas over the valleys and the basin of the Grigna massif. Among the sights there are two incredible rock towers called the “Monk and the Nun” that instantly sent my thought over to the and their mythical Eiger, Mönch and Jüngfrau mountains. Accidentally, these were visible from the summit.

As we neared the refuge, the temperature dropped, and it was perceived even colder because of a nasty wind. I guess this was the price we had to pay for such a clear day, but holding the frozen iron chains to drag ourselves up difficult points was really a fee paid with physical pain. Without gloves my hands got critically cold to the point of aching for an interminable time before warming up a little bit and recovering the sense of touch as well as movements. My body was also shaking with shivers and I mumbled words through my numbed lips. Unprepared at a windy -3° C, I wasn’t in for anything nice. 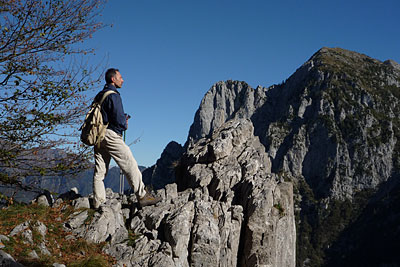 We stopped to take in the superb view from the Alps to the , while the lake looked like a mass of solid blue splashed over the palette.

From the top there is an alternate path you can follow to get down, but I wouldn’t be tempted into doing it again. Last year, in fact, I took other hikers’ advice to do this Piancaformia crest trail and after one hour’s walking I found myself struggling to keep balance on a thin ridge with sheer drops on either side – a dizzying experience when you do it on your own. But again, this time round I couldn’t possibly have enjoyed the advantage of company to embark on the crest, because Paolo feels giddy at the slightest drop.