I have a special knack for getting myself mired into funny situations and today I’ve got into a typical mess of mine again.

As most people are bracing for a long weekend with All Saints’ Day next Tuesday, a flurry of plans is being made on how to spend the time off work doing interesting things. So on Saturday I got a call from Veronica who suggested we should go for a hike in the mountains the following day. I was eager to keep myself busy with some healthy activity, so I unconditionally accepted, and even though the plan was not drawn down to the smallest details, I issued a blank cheque as to starting time and destination, only asking to be informed when the schedule for the day was eventually finalised.

I was later texted with instructions for an am start to Brumano and the subsequent climb to the Resegone mountain top. In the evening I prepared everything I’d need, clothes, hiking boots, water and a ration of home-made baked beans, minutes before setting out to Paolo’s house where I was invited to dinner. So far, so good. However, as we were having starters a call arrived from my friend Claudia who I had given my word to about attending a welcome party in honour of her mother who was coming from . And all this was also due to take place on Sunday!

Claudia said that her mother had missed a flight in and would be arriving in pm rather than midday but as they had already ordered food I was still invited to lunch. There and then, I couldn’t bring myself to go back on my promise and did as if nothing was wrong. When I hung off, however, I was in a state of utter confusion about what to do. On the other hand I couldn’t call off the hike either as I’d spread the word to other people and, above all, I was not eager to repeat a show of mine I haven’t written about yet.

As it seemed that either way would be the cause of major embarrassment, I decided to honour both my promises. On Sunday morning I turned up punctually at the rendezvous and dragged everybody off in a rushed start leading the way with my car to Brumano. I explained I was going to hike as far as time permitted and then whizz off to lunch somewhere else because a case of overlapping commitments required my nearly simultaneous presence in two different places. I texted Claudia saying I’d be a bit late.

I did reach the Resegone mountain top in good time and it was 12 when my friends saw me start a breakneck race down the stony path to the car. It could have been an easy quick descent but a heavy layer of clouds was covering the lower part of the trail and I landed in a fog so thick that it caused me to lose my bearings three times. 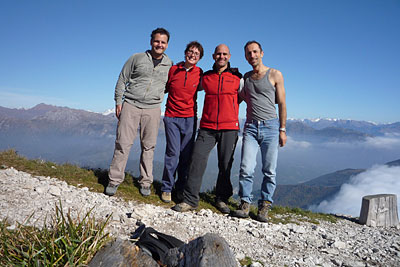 I once realised I had taken the wrong path leading to a neighbouring valley and had to run up the slope. Later I couldn’t recognise the places and spent a hell of a time going frantically to and fro until I finally came across a Frenchman who assured me I was on the right way to the road. But by this time my heart was already throbbing for the exertion and I was panting in the throes of having wasted all this precious time.

In the car I stripped down to my vest, turned the heating up to the top notch to ensure the drying of my skin, brushed my hair in the rear-view mirror and started to drive down. I only put on my sweater when I was standing opposite Claudia’s home, in order to become a presentable man after the morning’s adventure.

I was not too late for the party. Her mother had indeed arrived, contrary to the last news, and we had a lovely afternoon together. She brought me coca leaves mate which I’m very curious (and fearful) to try.

To give a full account, I should say Veronica and the others took a dreadful three hours to get down  from the top because they got lost several times too in the heavy fog. They were only in town at 7!