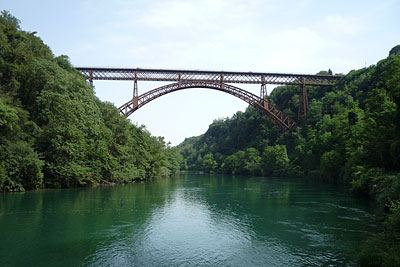 On Sunday the weather was torrid. It would have called for a mountain outing, but I didn’t feel up to an early rise. In the course of the afternoon, though, I was swept by repentance for wasting the day aimlessly. So I brave-heartedly faced the burning air outside in search of a place that offered some relief. I headed to the river Adda, because it has water and shade, the right remedy I needed short of reaching the cool mountain air.

The Adda now separates the provinces of and , but for centuries it was an international boundary, so to speak, between the Grand Duchy of Milan and the . It originates in the Alps, flows along Veltlin, then into and out of it leaving the mountains behind and finally it crosses the plain before throwing itself into the river . This variety of settings give the Adda a number of identities, but one of the most attractive sections is indeed between Paderno and Trezzo d’Adda, where it cuts a gorge in the surrounding territory that, apart from providing a geographical barrier for past boundaries, makes a very particular environment.

I first saw the Adda’s green blue waters from the height of the Paderno bridge. With a single high arch, its truss structure spans over the valley for and allows the passage of the train in the lower deck as well as the motor traffic on the upper deck. Down at the water’s level I looked up, and there stood the rust-coloured structure more imposing than ever, a full-fledged engineering work and a masterpiece of industrial archaeology. Give or take, it is already a impressive 120 years old. All around this beautiful man-made structure opened the green lush landscape crossed by the Adda.

Cycling down the valley in the middle of the fresh woods I found other beautiful things that told the long tale of ’s industrial history. The river has in fact been exploited since the 15th century for the derivation of navigable canals, and in the last 100 years for the generation of hydroelectric power.

Both uses were intended to serve the city of . In fact, the metropolis firstly needed easy communication routes to facilitate the carrying of goods. The amazing Navigli network was devised at a time when water was the most obvious means of transport. In the canals the barges could slowly flow loaded with heavy goods. They would be driven by a pack of animals led by a muleteer when the current was not helping. 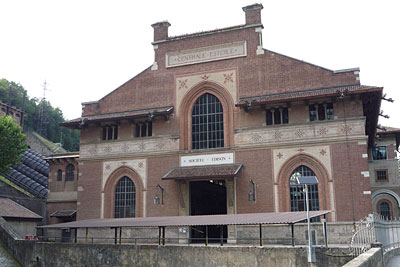 Later, with the advent of electric power, developed a need for energy that could make its network of tramcars rattle across the city. At the turn of last century, therefore, other canals were built to feed the power plants that would meet this demand.

These hydraulic works and remarkable buildings are still there to be admired. The plants are currently working and make more amazing examples of industrial archaeology. Their architectural style is often an ornate eclectic that contains references to renaissance and medieval styles. On this trip I did not just find relief in the cool air, but great delight in history and architecture.