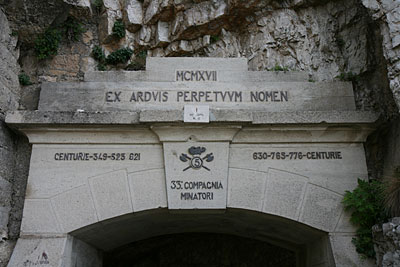 This is the chilling opening couplet of a wartime song composed by the alpine troops who fought on . I listened to it for the first time after coming back from an extraordinary mountain excursion. My heart was already touched by the dangerous mixture between stunning high mountain scenery and tragic historical events. At home, the poignant notes of the song and its lyrics easily moved me to tears.

The name Pasubio is familiar to all Italians for being immortalised in the aftermath of WW1. Many towns have a street or square dedicated to this mountain, along with Monte Ortigara, Piave, etc, i.e. the famous battlegrounds of the Great War. In , for example, we find them in the very town centre, which was developed in the 1920’s when the war wounds were still open in the conscience of the Nation. Too many horrors and much suffering needed cauterising.

Somehow, however, these names used to sound inane rhetoric to me, a matter belonging to past generations. At most, they reminded me of historic facts learnt from boring schoolbooks. Until I came back from that mountain, and all of a sudden they sprung out of their marble plaques, their letters dripping with blood and moist with tears. It was as if I could hear the moans of the wounded agonising on the battlefield. 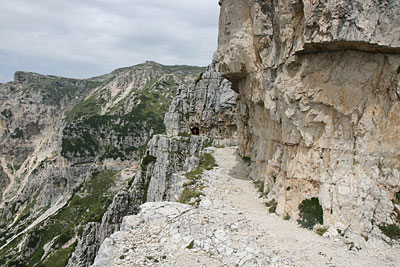 In these toponyms it was as much the celebration of victory that mattered, as the extolling of the tremendous human sacrifice that had been exacted from many young men. The country had come out a winner, but with a terrible toll of lives, wounded and disabled war veterans.

Like other similar places on the front, was the theatre of harsh combats between the Italian and the Austro-Hungarian Armies. Thousands of soldiers were sent up there to fight for two years and an incredible number from both parties died blasted by explosions or shot down by gunfire. What the firearms didn’t do was taken care of by the devilish winter weather and the atrocious living conditions.

This was the frontier between the Austro-Hungarian province of Trento and the Kingdom of Italy, an essential line to defend because if the Imperial Army had made a breakthrough, conquering the plain and reaching Milan would have been a piece of cake. The war would have been lost. The two armies stationed on top of two facing crags at an altitude of over and confronted each other for two years. Summer and winter.

The outstanding feature of the hike is the so-called 52 tunnel road that was dug by the Italian engineer corps as an alternative to the existing access road, an easy target from the Austrian Crag. After a 3 hour ascent through successive tunnels, you reach the barren mountain top where the tragedy slowly unfolded during those unending months. It has been declared a Sacred Area and nearly 100 years on it stands as a monument to the Fallen from both armies. 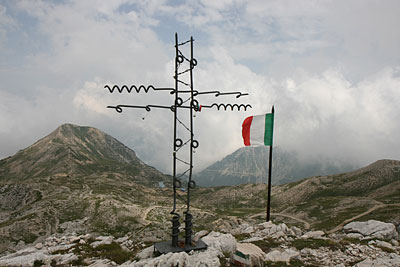 I did not expect I should be so touched. The notes of the song ring back in my ears, and the couplet “those who won’t come back, those who’ll stay up there to die” comes capped by the onomatopoeic rumble of the cannon bom borombom. The compelling tune would coax me into playing it over and over again, yet I refrain because I don’t want my heart to break. It is then better to close my eyes and see the bleak summit area still scattered with rusty metal scraps, barbed wire, warped boot soles. It is now lonesome desolate nature where once raged death.

Today on my usual route back home, I walked past the Tower of the Fallen. I stopped and looked up at the statue. It did not look like the celebration of Victory, but rather like a death monument dedicated to all those poor soldiers and their dear ones. I thought WW1 was already tucked away in the folds of history to be my concern. I was wrong. I had not taken into account the effect of