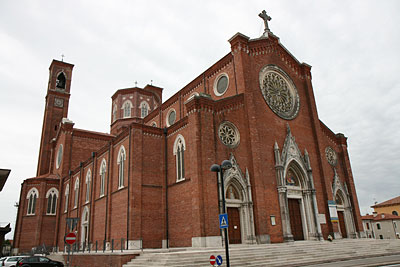 Every year since the Chamber of commerce has sponsored local companies to exhibit at Marmomacc I have paid a visit to this important event. lies in a marble district and is rich in companies that extract dimension stones and process them. Driving out of town on one northbound road you can see a series of sawmills with tall cranes where blocks of the red local marble are cut into slabs or tiles for the most luxurious uses. Some of ’s central streets are even paved with this beautiful stone and look more like elegant interiors than public spaces. What could be a better place to hold this exhibit?

Marmomacc is engrossing. Even for a layman like myself, who has nevertheless acquired some awareness of the sector, it is a pleasure to admire exotic decorative materials coming from the four corners of the globe. Then, there is a pavilion where the most incredible giants of machines with numerical control can perform operations from as simple as cutting blocks to as complicated as carving sculptures. You are left wondering whether craftsmanship still exists today.

The fair has also hosted an increasing Chinese presence. I strolled in this section of the exhibition among the plain booths bearing exotic inscriptions in Chinese characters. A water kettle for the tea was often peeping in an angle; uninviting sweets or toast daubed with dubious concoctions were offered on the counters; and at lunchtime the exhibitors didn’t make a fuss of eating in front of passing visitors. It was a different world altogether.

While I was in , I stayed on for the weekend to visit Bassano, which was a nice surprise. Lying in the proximity of the former WW1 frontline, it emanates an uncanny historical fascination. It is as though the air was still redolent with a mixed odour of the blood shed in that absurd human sacrifice and the smoke of incense burned to extol the victorious ending of the conflict.

But at what price came the much-celebrated victory? A neo-gothic red brick church sided by two slender bell towers caught my eye. A marble plaque read that the ossuary temple hosted a shocking 5,405 war victims, who were only a tiny portion of those fallen during those three death-laden years. The Nation’s leaders of the time did well to smother the heart-rending grief of the bereaved families with commemoration and turn Bassano into a shrine-town. I stared at the inscription in bewilderment, trying to give myself a reason, but unable to find one.

The memory of those historical events is engraved in the monuments, but increasingly less present in the minds of us Italians. I, for one, made little of them until I climbed Monte Pasubio before the summer. Commemoration, like a cemetery, is aimed at the generations affected. After that, wistful recollection is just a sterile attitude that probably only the historian is allowed to indulge in. Looking at the buyers at Bassano’s street market, I could predict that the change will be even greater in the times to come when the population consists of a multiethnic mosaic with a wider range of cultural references. 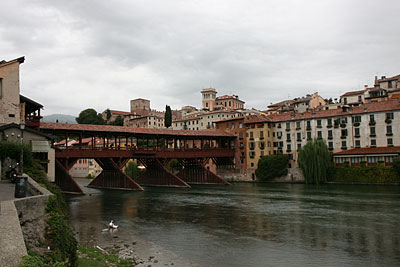 Bassano reminded me of a family story. My grandmother used to pay a yearly visit to these places with her father who had fought in the Lybian war (or was it WW1?). As a veteran he used to reunite with a former fellow soldier, Mr Ceroni, who was proverbial for his stinginess. The man joked saying that he liked to buy oversized shoes for his children so that they were unable to wear them (in both senses of the word!), but couldn’t complain about not having them.

This anecdote extended my memory beyond the boundaries of direct experience. By remembering it, I gained an interesting historical insight into an epoch gone by. I then tried to relive the atmosphere of those post-war times by pouring over the military memorabilia exposed at the local museum and reading about the history of the famous bridge.

So many things have changed in a hundred years. Reasoning like Mr Ceroni is not admissible anymore in the era of consumerism when people change shoes just to keep apace with the fashion. Likewise, those national values of patriotism cannot be said to be the same, even in Bassano.