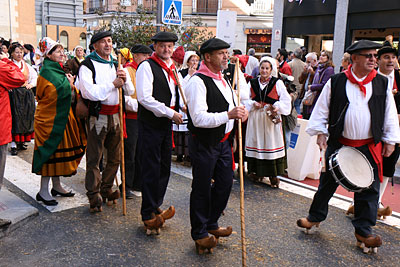 I have been to several times, and I’ve always come back with the desire to visit again (but does that not happen with almost every country I go to?). There are many regions that I haven’t visited yet and, until recently, there were even some famous cities. It was high time I took these off the list, so I booked a flight to and spent a week around the Castilles: the old and the new, or better said, according to their present denomination, Castilla-La Mancha and Castilla y León.

I packed , , the Escorial, Ávila, and into my 8 day tour. It may seem a tour de force, but it all came along quite naturally. As the plan was only a loose one, I kept adding places as long as there was time available until I got to the bottom of my wishlist.

I would be at a loss to pick out one favourite town. I was certainly impressed by the , whose austere bulk was made larger by the gloomy weather the day I visited. The long walk up the cinder path lined with plane-trees, under the rain, created much expectation, and when I was in front of the massive granite building with its slanting slate-lined roofs I wondered whether I had not strayed from my way on that misty autumn day and landed in some north European country by error. Trickles of rain dripped out of the gutters and echoed in the internal courtyards. The chilly weather matched the grey colour of the stone everywhere.

At the , the geometry of arches, porches and windows was a pleasure to follow. After gaping at the rich interiors I ended up in the immense church, itself in scale with the rest of the building. Coarsely hewn slabs of granite created a sensation of grandeur with no frills, an atmosphere of religious austerity that befits a monastery. This was however in contrast with the sheer size of the building as seen from the outside and the opulence of decoration in its interior, both designed to extol the achievements of the .

Another highlight was , and in particular the excellent view on its superb Plaza Mayor that I enjoyed from my hotel window. The tiny balcony on the third floor was incomparable and let me appreciate this masterpiece of Baroque architecture from unusual angles. Either by day or by night I didn’t get tired of going out and trying to understand what made this square so unique. Albeit imposing, the structure is simple, but the decoration comes in to add an enormous amount of detail that doesn’t spoil, but enhances the overall gracefulness. Other buildings are on a par with the Plaza Mayor and make the town monumental, but also welcoming because of the warm-coloured stone it is built with.

was a surprise especially because of its Gran Via. Again, the decoration was responsible for turning it into a truly monumental parade. Walking down it in just one direction is not enough to fully enjoy it because you would miss all the buildings on your side. So I came back walking on the opposite pavement admiring the facades I had earlier only skirted.

In I had the chance to see herders and shepherds parade with flocks of sheep and wearing traditional dresses from their respective regions. It was my friend June who alerted me about this event, and she also took me to the open day at the Railways museum, in a charming old station displaying old trains on the tracks. If it had not been for the retired railwaymen who eagerly explained with a plethora of details I wouldn’t have been so much enthralled by this exhibit. After making sure I could speak Spanish they launched into dumping  on me their advanced knowledge of electricity, motors, and locomotives. It wasn’t the language that put me off, but rather technical details that I could hardly comprehend. 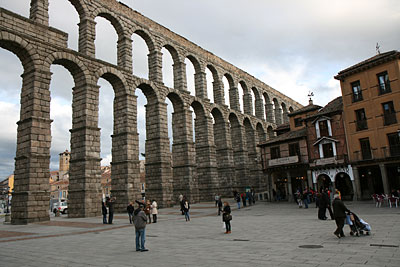 Modernist art was also a constant lively presence all along this trip. Coming from an iron-poor country, I was surprised at the amount of iron structures forged into incredible decorative patterns, on the facades, in the railings, and the gates. In there was even an excellent museum focusing on this productive artistic current.

I am nearing the end, and I realise that by not mentioning them I would be wronging the cold, walled city of , with its marvellous Roman aqueduct, mudejar-style facades, as well as a fairy-tale castle. And of course the cathedral and the synagogue of . Just too much to write about in just one page, but I have already all these places dear to my heart.