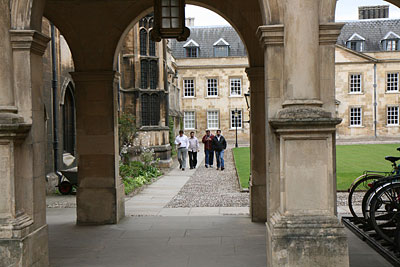 My flight to was due to leave early in the morning, so I spent my last night in because it was easier to reach the airport from there than from . I stayed at a great youth hostel which was full of international guests, but retained a quintessential English flavour emanating from the wooden flooring, the staircase, and the brick structure. The moment I stepped in I felt like going hostelling around the country as I did when I was 18.

was a far cry from hustling bustling . A taxi driver who saw my sister-in-law and me at a loss trying to find our way addressed us in a fatherly tone and called us “Luvely”, cracking a joke in perfect English humour after patiently explaining the way we should take. It felt so relaxed and friendly, not impersonal like in the capital where everyone was alien to their neighbour.

The same air of tranquillity impregnated the colleges with their perfectly tended greens, as well as the streets of the old town, where the lives of its inhabitants seemed to be scanned by a human rhythm. The river with its traditional boats flowed peacefully by under the ancient bridges. 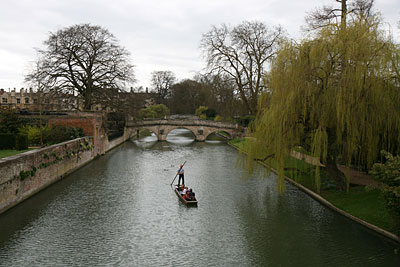 In order to stick to the theme of today’s multicultural , I had dinner at a Pakistani food joint where the names on the menu came without a word of explanation. I don’t know if it was to boost the exoticism of the place or because the locals were already familiar with all the items, but I was baffled and had to ask the owner to give me a hand. In the end I was brought hot nan daubed with melted gee and a dish of spicy lentil curry.

The night was very short as my train left just after 5. I wished I had been able to spend more time in , maybe turning back the clock and becoming a student again. But now my flight was going to take me to the next destination, , where I did hope that the weather would be just a tiny bit warmer than this windy chilly town.