The world’s biggest natural stone exhibition held yearly in took me to again, and gave me an excuse to stay over the weekend to explore new places. I feared I may have run out of ideas, given the restriction that my destination should be reachable by public transport and be within a couple of hours’ journey from . I could have headed north into Trentino, but finally my choice fell on and two little towns that seemed interesting.

Once more I got confirmation of a lesson I had learned before, that you ought never to rely on other people’s advice for places to see. Everyone has their personal taste and more importantly has lived a travel experience influenced by the circumstances of their particular visit. The reason I mention this is that of the two towns I had picked, a friend dismissively described Cittadella as having only a circle of ancient city walls, whereas in her view Castelfranco was by far the better. But after visiting the two, I concluded that my opinion was diametrically opposed to hers.

Castelfranco came across as a pretty little town, agreed, but lacked a stunning architectural landmark in its urban texture. Remarkably, it was the birthplace of Giorgione and one of his paintings is on show in the parish church. I waited until it opened at pm to give a sense of fulfilment to my passage through the town. The interior, in accordance to an architectural style commonly found in churches, was bare, with white spaces dominating the visual effect. If the first impression is one of un-accomplishment, later on one cannot help but remember the classicist lesson taught by Palladio in his own land. All of a sudden the lines and the spaces acquire a harmonious stateliness and rise to materialise the purest of styles that can do without an excess of decoration. It would be a superfluous addition when beauty is already displayed in the very structure.

Giorgione’s painting was indeed worth all the waiting: an enigmatic scene that conveyed all the worries felt in a period of turmoil. I reflected how we tend to minimise the scope of change that other epochs went through, always thinking that ours is the only moment of great transformation. In reality every historical period was beset, and at the same time enriched, by factors of change, unprecedented novelties that revolutionised set ways. It’s in the essence of things that inventions or discoveries gradually come to modify aspects of life, but our point of view gives for granted the legacy we have inherited from the past and flattens it as if it had monolithically been created in one day. We fail to perceive in an error of perspective the scope of change at different stages.

Another aspect I was awakened to during this weekend was the change that can happen in people’s lives because of the present-day economic difficulties. The young man who received me at the hostel used to work as a shoe shop assistant, after years as a social worker looking after mental patients. With sales plummetting, his boss had been forced to lay off workers and he was hired again by the cooperative he had left upon acknowledging that the nature of his work had utterly depleted his mind and body. Mirco found himself moved back to square one in a matter of months, but retained commercial savoir-faire and held high hopes for a better future. 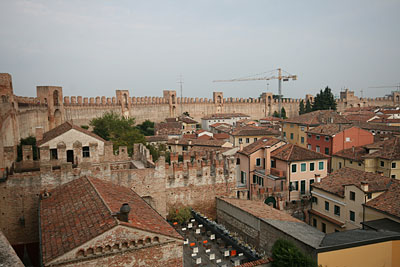 I ended my weekend by taking part in an original activity. Sunday was the European day of Jewish culture, and the community of and organised a visit to the synagogue, on that day open to the public because of the inauguration ceremony. I sat on a pew and listened to the speeches, of which the Catholic priest’s was paradoxically the most eloquent and effective. A Muslim cleric was also invited to intervene. But for all this atmosphere of conviviality, my mind stayed focused on the contradictions that religions bring about in the world. They may well preach love and understanding, but too many of their followers hate and harm those who stick to a different credo. At least there was an upside to all the rhetoric because we were invited to a kosher banquet when the speeches were over. However, I stayed too long, thus missing by a couple of minutes the start of a guided tour to the Ghetto. I had unwittingly given up knowledge for a full stomach, but it was all blessed by divine approval.