When I outlined the itinerary for this Morocco trip, as it was going to be my fourth to the country, I knew I’d be seeing places again, but I didn’t mind.

After all, part my first trip had been marred by flu that kept me bedridden for several days just when I was crossing the places deemed to be the most stunning. On that occasion my friend and I hired a car, but I was forced to let him drive around while I convalesced in a hotel room, and even after I felt good enough to get up I still hadn’t recovered enough strength to enjoy myself to the full.

Then I took another trip to the Atlas mountains on public transport with a lot of walking thrown in, but didn’t make it down to the desert or back to Fes via Midelt, so I still harboured the ambition to cover the route I had once plied. Time had dimmed the memory of that hurried passage across the mountains and the only thing I had retained was the disarmingly bleak picture of a snow-sprinkled highland under a gloomy sky.

But the decisive argument to repeat that itinerary was based on a general consideration. If we keep going to the places that are near us and we are not afraid of facing comparisons with our former experiences, what is the ground for the widespread belief that one should never repeat a trip, especially if it was a memorable one? However good it was, we can still appreciate new aspects, gain a fuller understanding of the place, maybe conclude without mystification that time had idealised our memories, or appreciate the changes that the place has undergone. Nothing ever stays the same over time, not even the mountains. Observing evolution is a goal in itself.

This time I hired a car. I hesitated because if I don’t mind driving, I have never had a car of my own and I am not affected by the car myth. Besides, my habit when I travel is to mix up with the locals and live an original experience, a reason for that also being that I often travel alone. Having a travel companion this time helped me make up my mind, only it was too late to get the best deals because cars are in high demand. With hindsight, I can say that without a private vehicle I wouldn’t have been able to see so many places and stop wherever I wanted to enjoy the superb landscapes.

Five years gone by after my last visit gave me an impression of change. It is most evident in the towns where foreign visitors flock in by the hundreds for weekend breaks, but also in the remote countryside, scattered with small guesthouses in the most improbable hamlets. Another indicator was that I couldn’t find a single barber in Marrakesh to give me a haircut for the fair price. All those I asked either quoted a preposterous amount of money or tried to cajole me to get in and I’d give whatever I wanted (but experience has taught me that “whatever one wants” never meets the other party’s expectation. This unclear approach is a certain source of conflict and disappointment).

Talking about people, I admit it is always a trial, but I have savvy on how to deal with timewasters. The fake friendship approach that aims at creating a bond of indebtedness in order to wage the final attack is a speciality of local con artists. I was firm with all from the start and didn’t let a handful of them spoil my time. With children you are also put to a hard test when they pester you with requests for one dirham, pens or bonbons. I was firm with them too, with one exception. I gave two children a coin when they guided us in the maze of paths on the river bed to the village because they had earned their bakhsish.

It is however surprising that even certain established dealers should always try to swindle customers. I had to bring back some chunks of amber scent for a friend and all perfumers sold it for 2 or even 3 dirhams a gram, when I perfectly knew the current price is 1. I finally had to pretend leaving the shop in order to get the right price, but I wondered what the reason is for this sleazy attitude? Mass tourism certainly plays a role, but it is also cultural because people in some countries don’t systematically see the tourist as the lamb to the slaughter, whereas in others it is a constant battle.

All in all, in my opinion Morocco is the most amazing Arab country. In fact, it is Arab only to a certain extent with the majority of the population belonging to the Berber ethnicity and a dialect that is so removed from the literary language and so incomprehensible that I hardly ever dared to communicate in Arabic. Even a Palestinian friend uses other common languages to talk to Moroccans, if this is enough to give an idea. Only on the last day did I happen to ask information of a few people who could only speak Arabic, and I was happy to use my know-how, but on the whole it was much easier to just use French. In any case, urban Moroccan spoken by the middle class is so mixed up with French as to sound like a funny potpourri of languages, something I wouldn’t give a minute of my time to learn, if the outcome has to be a cacophonous clusters of consonants that pile up in the flow of sentences interspersed with French phrases.

Apart from language and population, Morocco is a country set aside by its wonderful mountains, and it shares with other Maghreb countries a cuisine based on an alternation of the Friday couscous and the everyday tajine, practically a cooking method – both of which know a great number of variations.

When you come to the cities you can appreciate the glory of Arab civilisation at its best, with exuberant decoration of the utmost refinery hidden in the spaces around secluded courtyards that open behind the screen of unassuming walls. On the Atlas range you can see different lifestyles and building techniques, adapted to the climate and landscape in such a perfect way that the traditional villages and kasbahs blend in with the colours of the earth and appear to be nearly camouflaged.

If you can forget being in Africa while you tour the North, projected towards the Mediterranean, beyond the mountains the desert is there to remind you are on the doorstep of deep Africa. The considerable black population descendant from the slaves brought in to work in the fields and in the households gives you a totally different image of Morocco, unexpected and unknown. The Draa valley seems to be the corridor of transition between what was once called white Africa and black Africa. The great numbers of people with black African features is mixed with fair-skinned Berbers or Arabs, and they’re all Moroccans. 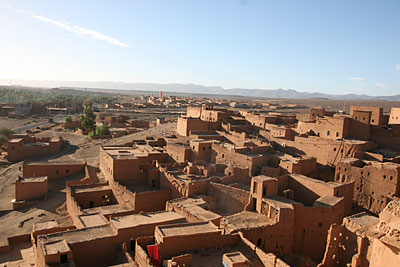 Even mud brick buildings are common ground between the two sides of the Sahel. Its durability made possible by the dry climate, this technique survives in present day constructions mostly for the sake of appearance, given that armoured concrete intervenes in the structural parts and is daubed over by a thin layer of mud to conceal the lapse from tradition. But good-looking as they may be, mud brick houses can’t be very convenient to live in. I was left wondering what will happen in a few decades to the crumbling tall houses in the semi abandoned Mellahs, or Jewish ghettos, or the ruins of qsars in the mountains. Maybe just the same as has happened to my native region’s traditional rural houses which, after being deserted by the peasants, have either tumbled down or have been converted into fancy residences that are the ghost of their former selves.

Morocco attracted me once more and I was happy to fall victim to the lure. Even though I was not able to live the full contact using the language, I was still able to enjoy the beauty of this country and the originality of its culture.