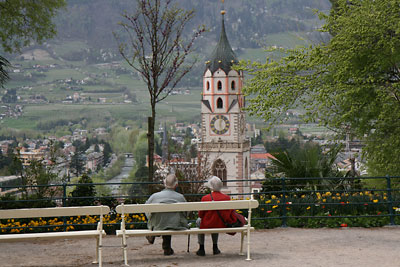 My visit to Vinitaly took me to South Tyrol as an extra weekend trip this year. The choice was dictated by chance because I found a convenient car-sharing ride to Bozen. I therefore set Udine aside, and a related logistical nightmare, promising myself I'd visit another time to mark the 100th anniversary of WW1 in the relevant places.

Talking of war, South Tyrol is the region where I did my military service – but without fighting. I didn't realise my luck at first, but came to appreciate the bonus of being stationed in such a wonderful region. It was then that I developed a liking to mountain hiking, sports, and active life.

I spent my Saturday in Meran, but didn't go there with a mind to see my now abandoned drills barracks – although passing Untermais station I stretched my neck to glimpse at the massive building on the outskirts of Meran. It was there that sadistic corporals showered military discipline on successive batches of recruits. There was a rule for every moment of the day to curb every aspect of personal freedom, but in the end everyone got into the rut that would mark their next 11 months.

Meran is a glamorous town at only 300 m of altitude over sea level, but it is surrounded by mountains that exceed 3,000. Under arms I was not in a mood or had much free time to enjoy the charms of this town, but this time in just one day I made up for missed chances coming under the charm of its elegance in architecture, nature and atmosphere.

In spite of its crown of alpine peaks, the climate is mild and palm trees, just to name a species that one wouldn't expect to find in an Alpine town, grow lush along the Tappeneier promenade with views over the roofs of the town centre. The southernmost German-speaking spa was once the destination of the Empire's nobility, especially after the stay of Kaiserin Elizabeth, aka Sissi, which guaranteed a long season of glory. In its heyday, over 100 years ago, the surroundings must have lived at the rhythms of agriculture, in contrast with the mundane entertainments that made Meran so attractive. This lifestyle, with all the due changes that time has brought about, lives on in the vineyards and the orchards of apple-trees, all in blossom. But hill localities like Dorf Tyrol are markedly tourism-driven: the big farmhouses have been converted into tourist accommodation and new buildings have sprung up to cater for large numbers of holiday-makers. I was glad I was not there in peak season.

Arriving in Bozen the previous day, I was surprised to see the imposing Rosengarten so near between the mountains of Eisacktal. All of a sudden I was so close to the Dolomites and was sorry my time was so short. Nevertheless, my plan was quickly adapted. Instead of Rovereto (and the Museum of the Great War), I stayed another day in Bozen and on Sunday I took the Renon cable car from where the Dolomites opposite can be admired in all their splendour. 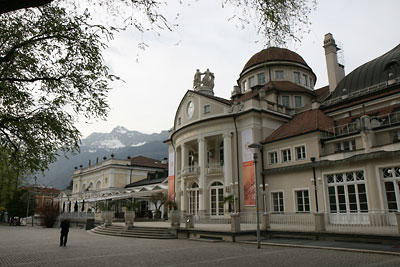 The problem was that I had run out of camera battery and I had no charger. So I had the idea to peel the wires of a phone charger which had a different voltage, but it was my last resort. I plastered the live wire to the contacts and in less than an hour the battery was... completely flat. I only hoped I had not permanently damaged it, but I could still carry out my plan. Even without taking photos I walked all day, from Oberbozen to Klebenstein and back, and then down the plateau to Bozen. Summed to the previous day's hiking around Meran it was quite a distance and my legs were nearly wobbly. I took another car-sharing ride to Verona and got ready for my visit to the world-famous wine exhibition. Alcohol would numb the pain in my limbs.