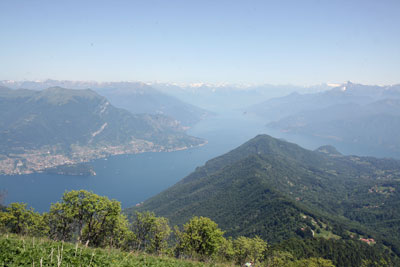 The top of Mount St Primo offered a magnificent sweeping view over Lake Como and the highest Alps, a combination of snow-speckled mountains and blue waters in the frame of early summer greenery. The temperature was responsible for some mist in the distance, but both branches of Lake Como were visible from the highest summit in the Larian Triangle, so called because this mountainous area is encompassed in the upside-down Y shape of my favourite lake.

As there weren't any signs that pointed to our proposed destination from the parking lot I needed to ask for directions. The bar owner advised driving further and taking the path used by most hikers, but that seemed to trivialise the excursion. The man sounded worried at my stubbornness; if we insisted on starting from there – he warned – we were likely to get lost. I made little of his worries, and not wanting to convey any bad feeling to my friends, I related only a half truth of what I had heard.

Later, two more people we came across also warned us about getting lost. It was a strange coincidence that made me slightly uneasy, but we directed all our efforts to understanding how we could join the main trail after emerging from the thick beech-tree forest – if we ever did, that is. In spite of being the organiser of the day, I'd never been on that trail before, and I secretly feared we might never see the rewarding view from the top.

All things considered, it didn't take long to reach the nearly 1,700 m high summit even by this longer, less beaten route across the wood. In the end we were able to admire the fantastic view together with other hikers who were enjoying their rest after toiling on the tiring slope. One man was sitting alone within the broken fence of a service hut reading a book, indifferent to the noise and the voices around. We sat near him not because we wanted to invade his privacy, but because space was scarce. We ate our packed lunch and teased each other. 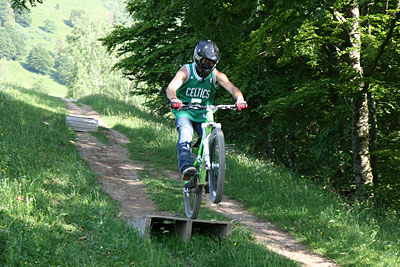 The man kept on reading his serious-looking hardcover until in the end we broke his silence and we got into talk. He advised us on the return route, which we did on a different trail in order to avoid the hillside that everybody said we'd get lost in. When we left something told me he really began to enjoy the peace he had gone up there to seek.