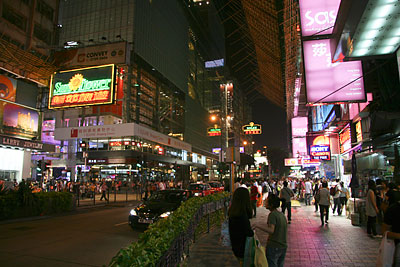 Stepping out of the shop, I felt sure of myself and happy to have exposed the plot, but discouraged at the prospect of having to start looking for another place again. I had indeed learned that knock-off prices are just a lure for the dupes, but that didn’t exempt me from starting the search from scratch in the jam-packed streets of the central districts, rather than retreat to remote parts of Hong Kong for a peaceful hike. The only comfort was that the weather was terribly muggy and wouldn’t have made very pleasant hiking.

From shop to shop, I went up and down the streets until I landed at one that was not particularly outstanding with its neon signs and windows packed with all models of lenses and cameras artfully displayed to attract customers, even though the items may not be in stock for sale. I went in and the owner stopped slitting open recently delivered cardboard boxes to attend to me. He checked the price I was asking on his computer, then asked me what model I was currently using. I feared he would attempt the same old trick, but instead he started giving me a long lecture on lenses and cameras.

The moment couldn’t have been more unfortunate as I was just dying to go for lunch and had already hunger cramps in my stomach, but this man was not going to end his tirade very soon. I wished I’d never stepped into his shop. What’s more, he seemed to enjoy his eloquence in pidgin  but mostly understandable English, in spite of an accent that sometimes called on you to guess a missing word.

He launched into comparisons with fast car models equipped with inadequate tyres to explain the importance of lenses to a camera for good photography. When he’d sufficiently expounded the concept, he grabbed a scrap of paper and drew a triangle with the letters P, H and T at each corner. His philosophy boiled down to this: Patience, Heart and Technique, these are the keys to good photography, all of which he took ample time to comment on and explain in the smallest detail.

For a shop-owner I must say he was particularly disinterested, not mentioning E for Equipment when he was the one meant to make money out of selling it. I think this is what made me put up patiently rather that make away giving in to the call of my stomach that was becoming ever so urging. Sometimes he seemed particularly amused at his own jokes and drifted into a laughter that squeezed his eyes into invisible slits, only to suddenly recover his poise and an earnest countenance seconds later. I felt that his speech was not directed at pushing goods on me, but friendly advice and I was even beginning to find him quite a character, especially in these surreal circumstances made up of a mixture of late lunchtime, humid heat, and my commitment to buy camera and lens.

While I was having lunch, his words came back to me and thought his view was not senseless at all. Why spend money on buying a camera that is just the latest model of the same series, when I already have one working? That man had said: Keep it until it breaks down! And the experience at the first shop had already aroused my suspicion that I was not making the correct decision. Moreover I was overridden by a sense of guilt for running after the latest model without actually being in need of one, just wanting to enjoy the shopping spree atmosphere of Hong Kong and thinking I would grab the bargain of my life, while in fact I was just buying something superfluous and therefore wasting my money.

After lunch I decided to get back to that man and buy only the lens from him, but search as I might, I was unable to locate his shop again. Again, every cloud has a silver lining, because I stumbled into a shop that sold me the lens for a more interesting price and with international guarantee.

I am not sure if saving this couple of hundred euros was really worth the toil and hassle, but at least I know what to expect and how to behave, should I ever come to Hong Kong again and have the unfortunate idea of making another purchase of photographic equipment.