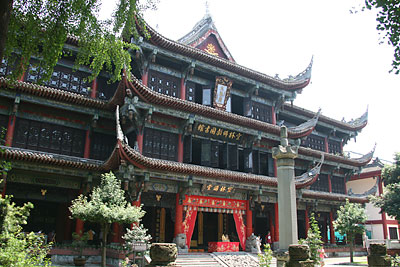 The flight from Shenzhen to Chengdu takes about 2 hours, so I arrived at the hostel at about 8 pm where I got a dorm bed in a stuffy room for two nights. I was glad they served some food on the plane, because I hadn’t had lunch at all owing to my precipitous rush to the airport. At least the fight I was waging against time helped me repress the hunger cramps that were ravaging my stomach.

It was for dinner that I had my first encounter with Sichuan food, by fame the spiciest in China. I ordered a bowl of jiaozi in broth and they seemed rather tasteless at first. There were innocent-looking specks of chilli pepper floating on the broth, which tasted all right at first. As I went on sipping it, though, I started feeling a funny tingling sensation on my lips, like myriad microscopic worms writhing on the sensitive skin. The owner offered to change my broth when he saw me fish out the guilty bits, but I stayed determined to reach the end without cheating.

Before leaving the provincial capital, I have to stock up with cash because there won’t be any exchange facilities on the circuit. The Bank of China is supposed to be the one authorised to deal with foreign customers, but in front of its headquarters there are several black-market moneychangers who hail the westerner that happens to pass by with the obvious intention to buy Chinese currency.

I decide to compare their rates with the official one, and it turns out that the man with the leather jacket and a shoulder bag that is as full of banknotes as a bank safe, offers me an interesting deal. Still, I’m dubious – I wouldn’t like to be palmed off counterfeit money – so I tell him. He offers a valid guarantee: should I find any forged banknote, I can come back to him and he’ll replace it! Every day he’s at his place.

When I get a thick wad of RMB for my euros and I feel awkward putting them away, there in the middle of the street, he suggests I should go into the bank and stow my money in a safe place. But that seems too shameless to me after I’ve turned to the black market for the transaction.

Although my stay in Chengdu is a technical stop, so to say, I’m going to fit in some sightseeing too. I pay a visit to Wenshu monastery, not unlike many others I saw last year. The positive side is that it has a vegetarian restaurant where you can have various dishes and they’re all jolly good. 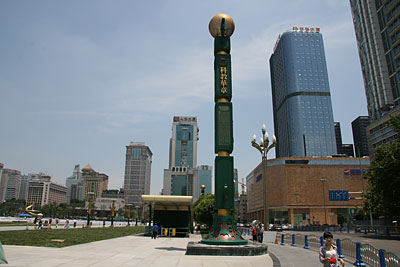 I’m not impressed by Chengdu. The central People’s square, that I make it a duty to visit, is just a vast place flanked by the science museum and decorated with cheap street furniture, a white marble statue of thickset Mao standing in its middle. The ancient buildings, where they have survived, have been turned into rows of mock old-style houses as you would see in plenty of other towns, and now harbour a shopping district for tourists. The rest is hopelessly and irremediably modern.

While I’m riding my bike along the wide cycling lanes, I catch sight of the tourist office and decide to enquire about entrance restrictions to the highlands. There has been unrest among the Tibetans in July and the authorities have blocked access to the western prefectures, an officially unavowed but forcible ban imposed on foreigners who are not to witness what is happening there. China must look as a united, harmonious country where everybody is happy to live.

The English-speaking lady might just be sincerely unaware of what has been going on, but I seem to be the one who informs her of the ban. When I ask her if I’ll be able to continue any further than Kangding, she gives very practical advice: “Just go to the bus station and see if they sell you a ticket. If they don’t, the area is closed.” Shame Kangding lies 8 hours ahead of Chengdu and I’ll gladly avoid going there if I am to be turned back.

I suggest she phone Kangding bus station to find out, but that’s not possible. Her line is not enabled to make long-distance calls, is the flimsy excuse I get. Not a very helpful tourist office, as I expected. I feel enmeshed by the secretive attitude of the Chinese bureaucracy and literally made a fool of. Better find relief in a delicious dish of hand-made lamian.