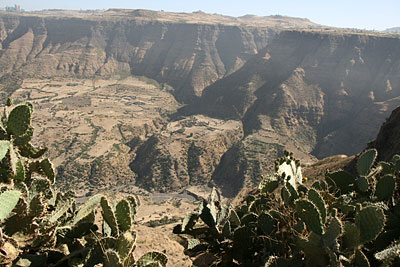 I don’t know how I managed exactly, but I made my way through Addis Ababa on public transport and emerged at the nondescript bus station from which the buses to the north leave. The place presents itself as a vast dusty stone-strewn area where large groups of people are standing under the fierce tropical midday sun, waiting for some bus.

If you ask where to queue up for your destination, you are sure to get a variety of answers with one common constant: it will never be where your informant is standing, but always a little further at an undefined distance. And in a vague direction, if you are to take a hint from the sweeping gesture drawn by the indicating hand. When again you go where you think you understood it is and ask for confirmation, the obliging answer comes along the same lines: a little further, somewhere there.

In this way I must have toured the station at least once, but in the end I came across the right person, a caring young teacher who was going exactly where I wanted. Seeing the shortage of buses to Chancho, we moved to a nearby stop where another company operates its buses. We were soon on board and on route.

The road winds its way out of Addis in a series of bends up the slope, from the top of which the capital appears spread out in the immensity of its 7 million strong population, but after which it’s an altogether different landscape: it’s the countryside. My mentor, having broken the ice and acquired sufficient confidence in his English, was keen to explain the ethnic, and consequently linguistic mosaic of Ethiopia.

He, for one, belongs to the prevalent Oromic group, whose language is not the one associated with the old Ethiopian kingdoms. It is transcribed in the Latin script, which is indicative of a more recent codification compared to Amharic, itself based on an original alphabet, one of the very few inherent to the African continent. I am unfortunately too tired to make the most of his lore and I can feel myself drop off, while my only concern is that my jet lag doesn’t become too apparent.

It is less than one hour to arrive in Chancho. There I get myself a basic hotel room that can rightfully enter my book of records for the cheapest accommodation. I’m steeped right into the Ethiopian hinterland, as I will be for the next three weeks.

The following day I got up at dawn to look for transportation to Durba. The bus didn’t turn up as I suspected, but while I was waiting at the junction I was easily spotted by a passer-by, a 48-year-old man who decided to adopt me. He took me to the bus station and saw me off on the minibus, which finally left two hours after I’d commenced my search. 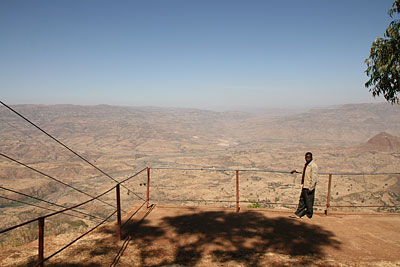 I found the cement factory at the end of the road and left my backpack with the warden at the main gateway.  I was followed by a group of children, soon relayed by a more dependable youngster who offered to lead me down into the gorge. This town lay in fact on the rim of an impressive canyon, called Muger, where the plateau is seen to come to an abrupt end and suddenly sink into a much lower level. My guide led me halfway down the steep path and then up along a series of ledges. I strove to keep up with him, puffing because of the altitude I was not yet acclimatised to.

The cement factory, built by the Italians in the 1930’s on the edge of the precipice, is still working and avails itself of a cableway that brings the stone from a distant quarry. A supervisor was watching the cabins come and go from a most panoramic terrace overlooking the endless succession of valleys and rugged mountains. The colours are a telltale sign of the arid season and a haze shrouds the faraway horizon in dim vagueness. From here the cableway drops into the chasm and gets lost in the distance, always travelling in the same straight line, until it reaches a white patch across the river where the quarry is presumably.

Another industrial plant looms in sight on the opposite side of the valley. It’s the new one recently built by filthy rich Saudi-Ethiopian businessman, Mohammed Hussein Al Amoudi, expected to soon employ as many as 1,000 workers, or so they say.