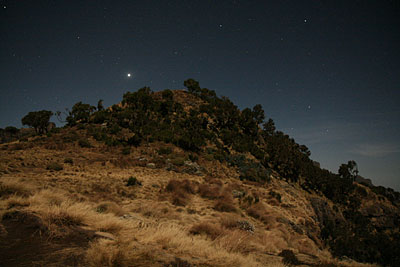 Standing by the edge of the cliff steeped in the bright moonlight, the hours of today reel in front of my eyes. The atmosphere is one of magic stillness, only the wind is brushing the menacing vertical rock faces that fall into an unfathomable darkness of lower forests and hills. The moon is illuminating yellow tufts of grass; the rest is dim and hardly distinguishable, apart from the imposing mountains that we made our way down from. In spite of the low temperature, I cannot wrench myself from this unique night scene.

The emotions that marked my trekking day are hardly describable. Sometimes I felt like standing on the very tip of a diving-board, poising to take a blind leap into the depth seized by a mixture of giddiness and excitement that took over reason. I perceived the distinct sensation of flying from these disquieting heights like the ravens and eagles that are to be seen in great numbers.  When these big birds alighted on the rock and I observed them jump into the void, by a destabilising trick of perspective it was as if the ground was giving way under my own feet and I was left, like these avian creatures, hovering over the chasm, defying the laws of gravity.

I was speechless before the spectacle, not only for its intrinsic beauty but also for the strong emotions it aroused. It is not a place for the faint-hearted, nor a trek for the weak-bodied. The altitude, the slopes and the fierce sun combined conspire to make long days of arduous march.

My nights pass more or less sleepless. I blamed the lack of sleep, but maybe it was the altitude, when at the second viewpoint at over 4,000 m my mind went blank, as if I was watching myself act from the outside. I felt as if I was not in control of my body anymore, likely to make an involuntary movement or lose balance over the wall of rock that dropped perpendicularly into the chasm. This strange sensation came and went all day until the evening.

At Chennek I had a restoring shower in the cold water of the fountain. As usual, Janto took on himself the task of brewing a nice cup of tea and we even the luxury of some sugar. Then, we set about cooking dinner. Relying on last night’s experience, we gave it its due share of time and poured in more fuel to get a hotter flame than last night. It was indeed a long process that lasted 2 hours, and it was only a dinner for two. At least, we managed to concoct a decent meal of boiled potatoes, fried onions and scrambled eggs accompanied by macaroni. It was fun to be tinkering about with only few pots and pans.

Among the people we met today are a group of children with nice bonnets selling trinkets and, at the camp, the three long-time travellers that Janto was supposed to trek with.