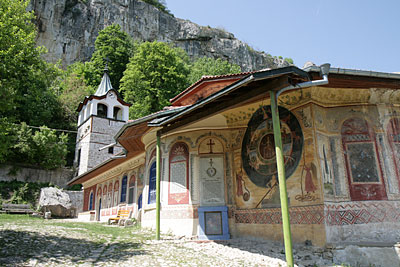 Today I hiked with Carlos from Chile to a monastery out of town set amid thick woods. The trail starts from the hostel and is very easy to follow until you get to the probably illegal building sitting on top of the hill. It is a huge villa whose grounds bar the walking path and you do not know how to get around the obstacle. I hailed the warden of this still unfinished building who took to us to where we could resume our walk, while he was humming opera melodies after he knew I was Italian.

We spent a full hour in the shady grounds of the monastery. The atmosphere was relaxed and the site interesting, especially the wall painting depicting the wheel of life. An infant was shown to grow into an adult and later into a decrepit senile as the time wheel was inexorably turned by scythe-wielding Death.

Then we decided to hitchhike back to town, but it was a long wait before a car stopped. When I came back from a long walk in town I found hostel owner Tosh feeding his guests and pouring out generous glasses of drinks. Carlos, Linda and some French people were already partying under the guidance of Tosh who kept the spirits up inciting all to keep downing booze.

That night in Plovdiv an Italian chap had just finished telling me he had eaten the biggest dinner ever when all of a sudden we were presented with a dish of grilled meat and salad. We looked at each other, but could not turn the food down. I was a bit more reluctant to swill down the successive shots of whiskey and mastika. The convincing argument against assuming those unnecessary calories were the flabby loins and stomachs I could see in the people partying. (I don’t know if it’s the diet, all meat and cheese, or the drinks, but you often see pot bellies in this country).

As Linda was relating her real estate adventures on the Black Sea and wittily recounting her experience of the country, the sun set and the night fell. Tosh suggested we all go out to a café, but it was more booze he was after. I just wanted to eat, so I only ordered water which made Tosh pull my leg for a while then I let all go to the piano bar. I didn’t hear the boys come back in the middle of the night. However, I found the bathroom door locked from the inside and it stayed like that for an interminable time. When I was finally able to go in I realised Carlos had been sick.