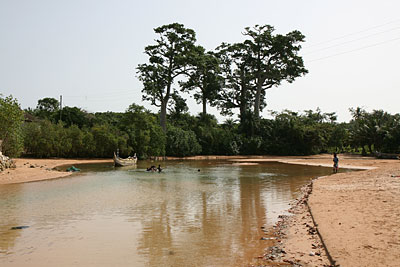 Passing next to a school in , two teachers saw me interested in the building and gave me a tour of what were former barracks, now in need of repair. Such places of interest could easily have kept me busy for some time, but I was also eager to move on to other beaches, and my choice fell on Busua.

It is one of the best beaches in , past Takoradi, and then Agona junction. It is closed by a beautiful grove of tall trees, of which two imposing baobabs bordering the calm lagoon where children often like to play. The fishermen had just come ashore with their catch and a middlewoman was selling their fish.

Before I had even noticed, I was told not to take any pictures of the turtle that was lying on the sand a bit off. In fact a strange creature was agonising turned on its back, probably injured and washed up by the current. Its bulky body was mostly green, with some pinkish spots and no shell. It was hopelessly agitating its paws.

Suddenly I put two and two together, and suspected that it was not because of a religious taboo that I was asked not to snap any pictures, but because it was illegal to kill these animals. I asked if it was good meat, and the man confirmed that the butcher was going to start work soon.

I thought I had seen enough yesterday when those two men on the rocks were dismembering a carcass armed with machetes. As I couldn’t recognise the shape of the body or its white flesh, I asked what it was, but I had to be told twice. My ears just refused to lend a meaning to the answer “dog”.

Here it was even worse. The butcher came along with two terrible machete knifes and thrust the blade into the turtle’s chest. Then he severed the limbs, while the poor animal helplessly stirred the bleeding stumps. It went on for long minutes during which my eyes were riveted on the gory scene. I was only praying it would last as short a time as possible, but the wretched creature seemed unable to die at all. I had to leave when the sight finally made me retch.

From Busua I also walked over the promontory to Dixcove, a lively fishing village, but not as idyllic as Busua. There is a fort painted white, a lighthouse on a small island, and a lot of hustle and bustle in the port. By the time I got back to Busua the heat had become horrible and there was not a breath of wind to relieve my dripping sweat. 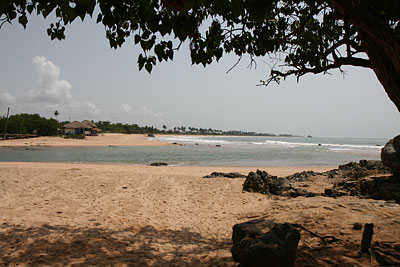 I realised it was still early, so I couldn’t hold myself from exploring the other side of the coast. At the extremity of the a path branches off and climbs the hill to reach another beautiful village, overlooked by the ruins of the Metal Cross Fort. It is Butre, where the fresh waters of the lagoon join the salty waves of the ocean. A rickety bridge spans the river and seems about to collapse under the steps of any passer-by. The water flows in or out according to the tide.

A sand bank just off the beach is washed by the mighty ocean waves. While I was tentatively walking on it I realised I was separated from the land by deep canals all around, and I got shivers down my spine whenever a wave pounded it. The fierce sun had already burnt my unprotected skin, but the rare beauty of Butre deserved any sacrifice.