Weining is famed for its much praised Caohai lake. I walked out of town to its shore and found a dock full of rowboats ready to take tourists out on a lake jaunt. I stood at the desk pondering what to do and found that a group of five was about to set out. A man said I could join them. The boatman used a bamboo pole to push the dinghy through a reed-bordered canal towards the lake passing vegetable plots.

Next to me was the couple’s daughter. Her parents were sitting on the back bench and sounded quite light-hearted, cracking jokes, bursting into laughter, and calling the birds what they thought were their cries. There were naturally only few fowls to be sighted, but if there’d been more, probably they would have been scared away. Then the man attempted singing, and finally let himself go to an undeclared yawn competition with his wife, the rule of which could have been who gives out the loudest, most protracted yawn wins. Some died away into a groan, others unexpectedly picked up into laid-back laughter.

Halfway into the sailing time we were accosted by an original boat equipped as a floating barbecue stall. They offered crayfish skewers, which didn’t particularly appeal to me o’clock in the morning. Besides, I still had the previous night’s dinner on my mind, if not on my stomach. I’d sat down at a roadside stand to have grilled skewers, but found out only too late that once grilled they were dipped into a dense dark oil to finish off the cooking. It was the most terrible oil, used to an excess until acrid and heavy, so that I couldn’t help leaving part of the food and complaining to the laoban, who muttered something about changing it that very morning. My foot! The image and smell of that oil came back to me as soon as I saw the two men fiddling with the utensils and fanning the embers. I averted my gaze from the barbecue boat, but my body language passed unnoticed. The girl was already prompting me to pick a couple skewers out of the bunch in her hand. I complied, but said one would do. I don’t know if it was in reparation, but the wife was so sweet as to buy me half a kilo of good fresh apples once on the ground.

I stopped at a section of the market where dog puppies were kept in cages or hampers and I wondered why. It seemed strange that they should be sold as pets in such a forgotten town. And in Xingyi I had come across a row of restaurants that had the gou Chinese character printed on the front to advertise they offered dog meet. One even sported a setter painted on the sign, if words were not telling enough. I hadn’t yet recovered from the surprise when a stray dog passed by, careless or oblivious to the risk of rummaging in the area.

The scene of buyers and sellers looked interesting and I took out the camera to snap a shot, but certain looks made me feel as if I was wielding a bazooka. Surrounded by embarrassment, I decided it was time I broke the ice and I asked them about the dogs. “They are not for eating. We don’t eat dog meat in Weining”, they declared emphatically as if the nearby town belonged to a different world. Once the people had realised they could communicate with me, they timidly started asking friendly questions. When they asked about currency, I pulled out the 100.000 Vietnamese dong banknote that I kept at hand in my wallet for whenever I wanted to do a gag. The effect was always guaranteed. I heard the murmur of shiwan, hundred thousand, creeping through the crowd while the banknote changed hands and with the help of the index finger startled eyes counted the noughts on the figure. 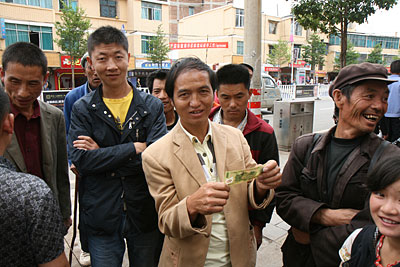 Dog was allegedly not eaten locally, but I also wanted to avoid fatty pork. The best way to achieve my goal was eating at a Muslim restaurant where noodles are served with sliced beef usually from the joints on the ceiling hooks where it is kept to dry. Lajiao, or chilly pepper, comes on request, which doesn’t mean that the dish is not spicy. At the very least they add half a spoonful of ground huajiao, a spice with a distinctive pungent taste. As I couldn’t find any such restaurant, I sat down at another which seemed a good deal cleaner that the ones beside. Its laoban was knowledgeable about tourism and was happy to have a word with me. While I waited for my bowl of noodles, my eye fell on the health and safety certificate proudly displayed on the wall. The judgement line read “unsatisfactory”, translated into visual form by a yellow frowning face. Given that this was the lowest grade, what could the other restaurants have got?

All in all Weining was not too bad, but it seemed a waste of time to stay another night. When I learned there was a train at I left the room belatedly but unpunished, and made it to the station.