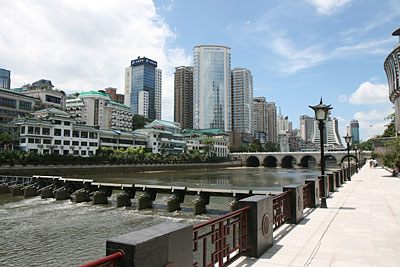 On the bus to I struck up a conversation with the guy I was sitting next to. He was from Zunyi, but currently on a summer placement in a accounting software company. I was the first foreigner he’d ever spoken to, and I ended up being a guest in his little bedsitter. Next door in the same suburban building lived his schoolmates, now colleagues. Jiangwei concocted a dish for dinner all and we spent the evening chatting together.

The next day I got up at half past six with my friends, left the flat, rode two buses and found myself in with a full day ahead of me for visiting provincial capital. The city centre is the right dimension for walking around it.

As the graceful Jiaxiu pavilion emerged into sight on the river island from a hedge of modern buildings, I realised I had by then come to terms with Chinese cities. On my first visit I had found them disappointing with their clusters of tattered tile-lined apartment buildings and soaring tower blocks, so anonymous that the only signature they bore was the regime’s official style, or the real estate speculators’. Old photographs of showed that only 60 years ago the aspect of towns was completely different, the most striking transformation being in the height of buildings. Now they have all but obliterated every trace of local architecture, if ever there had been anything worth preserving of the old towns.

You have to accept this. At first sight the present-day plastic face of Chinese towns doesn’t seem to leave much room for differentiation but, underneath, a lot of local culture survives in the markets, in the food, and especially among the inhabitants who uphold a vast heritage of customs and traditions. But local as it may get, the true common denominator remains the great umbrella of Chinese identity that probably finds its most outstanding element in the Han language and the proud use of the hanzi as a writing system, the most powerful tool to encompass the nation’s culture and exclude those who are alien to it. How many times I have met people who, upon my admitting a general ignorance of the character script, had giggled complacently – a reaction I’d always interpreted as meaning “Of course, this is our thing!”. 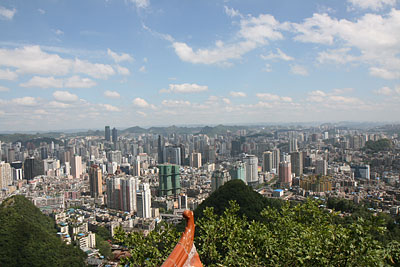 From the top of the hill, spread out at my feet. Against the backdrop of a clear blue sky the tall buildings rose like gems studded amid lush hills. The dimensions of the park could be inferred from the people count displayed at the gate: over 13,000 had got in since the morning. Inside they strolled, played badminton, span spinning-tops by cracking a whip, went boating on the lake, or paid a visit to the temple. Some people tried to walk blindfolded towards the fortune character painted on a wall with a hand stretched out to touch it.

I met my friends after they got off work. We had hotpot and then they wanted to see my hotel room. Being just a 68 Y room I felt a bit embarrassed, but they loved it. We cramped into the room and sat down on the bed and as the temperature increased for lack of ventilation or air-conditioning, we spent a good half hour chatting together. 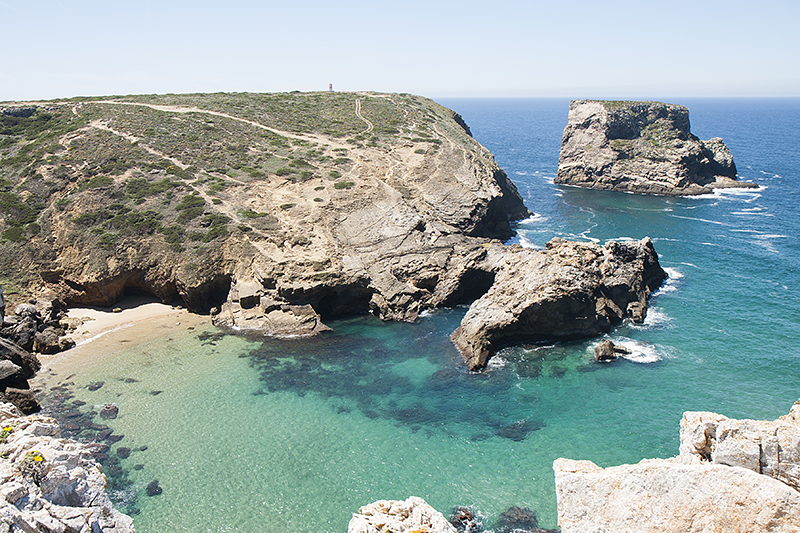