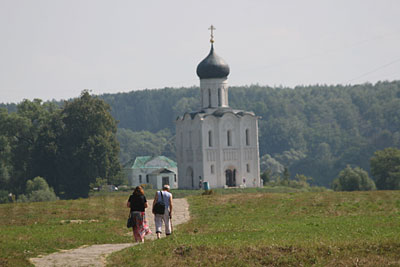 Vladimir was my first stage in the Russian province, the first town in the so-called Golden Ring, about two hours by train from Moscow. I arrived in the evening and was directed on the right bus by a kind lady who had some French, so we managed to get past the salutations and the numerals of my pitiful Russian. At the hostel a number of Russian speakers made me think of internal tourists, but something in their ways didn't sound quite convincing. It was not long before I found out they were Ukrainians from Luhansk, where the separatist war was raging. They had crossed the border in search of security, but wished the border had never existed in that place as they all felt their country was indeed Russia. The young man who could speak English expressed his strong views without resentment, his composure resting on the certainty that his oblast belongs to none else but Russia.

Bogolyubovo monastery is just out of town. I spent some time in the compound observing the people attending to their daily chores, the visitors, and the clerics. I then crossed the railway line by the overpass and continued on a path across the fields. I got to the stone chapel, the only building standing out in its whiteness from the greenery and the waters of the river. It was interesting to compare the same view in the framed photos on sale just outside the church, romantic landscapes of flooded fields where the chapel reflects itself in the thaw waters, or is barely visible in the thick autumn fogs that the pallid sun does not manage to pierce through. I don't know whether the effect on me was finally melancholy as if that monochrome landscape of water in its various states and the inevitability of its lastingness had magically dispersed the colourful summer palette.


The final effect was perhaps melancholy from a monochrome landscape of water in its various states and the inevitability of its lastingness.

Back in town I convinced myself to climb the old aqueduct tower and from its top admired the beautiful panorama and Vladimir's skyline. I was all of a sudden eager to discover the interesting buildings around. I walked along the main street touching amongst others the scenic Cathedral of the Assumption. Hours later, by the time I stood waiting for the bus back home, I had walked my legs sore, but at least I had a plan ready for the next day: it would be a day trip to Suzdal.

The minibus dropped me at the Saviour Monastery of St Euthymius, which I believed was the Kremlin, had the driver not corrected me. The grand enclosure with its tall corner towers promised all the best. I eagerly started from the monks' quarters, not giving particular attention to the undecipherable all-Russian captions or, for that matter, the dusty documents on display. But then my eyes fell on a film poster by Tarovsky with screenplay by Tonino Guerra, and I realised the talk was about Italian prisoners of war who were interned in this very place from March 1943 to June 1946. The column of imprisoned soldiers, driven by Soviet guards, arrived at Suzdal after the gruelling "davaj marches", named after the repeated Russian command to "move forward".

The memories of a local witness were recorded in a fragment translated into broken Italian, which nevertheless let the strength of the words came out all too clear. She remembered the immense column of soldiers plodding along the main street on a winter morning. They were emaciated and covered in tatters, some depended on the support of others to move on, and it was a very pitiful sight. The ladies tried to stick chunks of bread or potatoes into the prisoners' pockets, heedless of the soldiers' menaces. They disregarded the orders because they thought that someone maybe would help their husbands and sons too. In fact, they were practically all at the front. 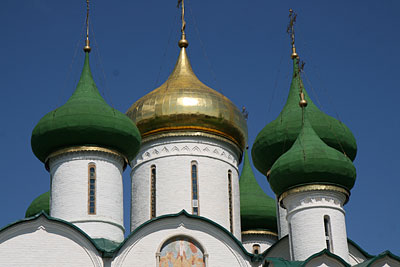 Those simple words were so touching that I kept reading them and when I finished my visit I returned to that room to give it a final look – inducing the alert warden to think I had made a mistake. Those Italian soldiers were the invaders and the enemies – I reflected – and the peasants must have been only slightly better off, but the tremendous power of solidarity was able to build bridges between two nations at war. Hundreds of prisoners died of typhoid in the first months. Later, a trickling trade between the camp and the village came into being – another witness recollected – because the prisoner exchanged the bread of their abundant ration for milk and tobacco, and thus saved several local families from starvation. Giacomo Duini, a survivor of Suzdal who was elected mayor of Cles, started a partnership with Suzdal.