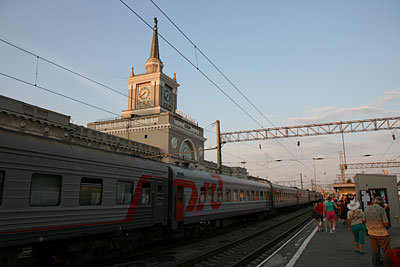 The train punctually pulled in at 6.45 am. I walked up the platform in the fresh morning air until I came in sight of the elegant spire on Volgograd's railway station. It was grand from the outside, but inside I was met by an even more impressive decorated interior that I stopped in my tracks to gape at in amazement. On the ceiling the fresco of a jubilant proletarian mob saluted the victorious army led by its commanders waiving red flags. My first encounter with Volgograd was already recounting the epical battle of Stalingrad, in fact my main reason for going there. Outside the station was the white marble fountain of the children dancing in a circle around a crocodile with frogs spitting water. It was a fountain like this that survived the destruction of over five months of fighting, an icon of innocent youth contrasting with the wickedness of adults.

Volgograd is a straggling town that extends for tens of kilometres along the Volga. The central district is relatively compact, but all around big patches of waste land disorderly alternate with developed areas. The State Panorama Museum is hosted in a circular building surrounded by the ruins of the flour mill. This desolate cityscape has been intentionally preserved to provide hard evidence to the tragedy that befell the town. The museum extols the patriotic war that cost Russia an unbelievable human sacrifice, and in particular the bloodiest battle ever fought, the real turning point on the Eastern front and in the whole war.

Mamayev Kurgan is the memorial built on the strategic hill that assured control over a large part of Stalingrad. Held by the Soviet army in the first stages of the fighting, it later passed into enemy hands; it is said to have come out of the war with gentler slopes and no vegetation left, its earth imbued with blood and mixed with shrapnel. The giant statue of the Motherland is visible from a distance, the focal point of everybody's gaze. It towers in its immensity over the knoll, with a raised arm brandishing the vengeful sword. Walking towards the top I climbed the steps of a theatrical staircase whose sides reproduced a destroyed urban environment. Then I came into sight of a big fighting figure emerging from a pool of water, and on the background Mother Russia making sense of all the suffering and death.

Volgograd is a city monument to the patriotic war that cost Russia an unbelievable human sacrifice, and in particular the bloodiest battle ever fought, the real turning point of the Eastern front and the whole war.

The recorded sounds of the battle, the music and the visual impressions had already made a moving experience, but I had not seen all. I entered the cylindrical hall, and after a dark passage I found myself in front of the eternal flame upheld by a metal forearm. Two soldiers were standing guard. All around the walls a golden mosaic drew enormous frames inscribed with the names of the fallen, too many to count. A stamping sound echoed from behind as a platoon marched in with a solemn goose step followed by the dragging of feet on the smooth floor. This march was the slow but inexorable passing of time, it was death creeping into a million families' lives, a festering wound that was still ravaging the flesh 70 years on.

I didn't need to be Russian to feel a shiver run down my spine and tears swell my eyes. After all, that war had been a catastrophe for every belligerent nation and things could be seen from a humanitarian perspective. I remembered an elderly neighbour sharing her sorrowful memories to me. She was just 9 years old when her brother returned on furlough before being sent to Russia. Smiling and proud of his army uniform, he had taken her up in his arms and kissed her goodbye. But a few months later the news of the rout became known and the parish priest one day knocked on their door to say that he had perished like thousands of others. Her mother broke down heart-rent and cursed Mussolini for sending all those young men to war – what for? – while everybody tried to keep her voice down for fear of the censorship. The outcome of the Russian campaign practically marked the fall of Fascism in Italy, so many were the victims blamed on the once arch-popular Duce who had led the country to ruin.

My hostel was on the ground floor of a tenement building, not exactly dreamlike, but with a nice atmosphere. There was a friendly French couple and the landlady, from Perm, could speak some German. I felt I was received into a family, especially the night when I was invited to join the celebration of someone's birthday and I was given two huge pieces of cake and vodka, poured into a table glass as if it had been mineral water.

A Caucasian student and a young businessman from Astrakhan were my other good roommates. I will never know whether the online translation tool was to blame for the weird question Zurab asked me that night, Was the tower of Babel in Italy? I must have looked perplexed because he hurried to make sure I had all my possessions before leaving the hostel. All this concern made me smile, but I was also rather chuffed. Murad drove me to the station and entrusted me to one of the attendants as if I had not been able to travel in Russia by myself until then. Like that I couldn't possibly get lost.