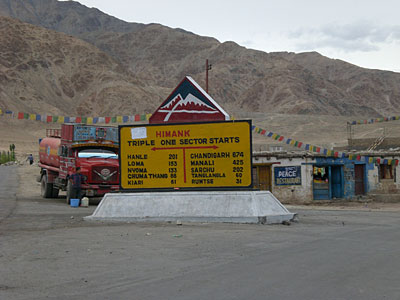 12 August - At 4 I had to get up! The dogs, which until midnight kept howling as in a concert reaching every nook and cranny of Old Leh, shyly started to make their voice heard even in these hours preceding dawn. I sleeplily get out of the door, turning the wooden peg and walk along the dark alleys, now knowing more or less where I can set my footing in order not to fall into the numerous obstacles: the open channel in the middle of the causeway, the gaping hole under construction, the high curb of a pavement... There are the dogs, however, which upon seeing me, emerge from the darkness and growl undecided between being frightened or causing fright. I utter a hissing sound to reappease them and they withdraw, still menacing.

I follow the main street, but it's still so dark and the roads so utterly unlit that there's no way to take the short cut through the market. I would never get out of it. Instead, I follow the road that takes me to the bus station, also thanks to the fleeting beams from the headlight of two passing cars. I can glimpse a bus dimly lit from the inside being loaded. I too climb up to the roof with my rucksack and fasten it with its straps to the iron railings that look secure enough. Then I go down and take seat n. 14 that I had been assigned. 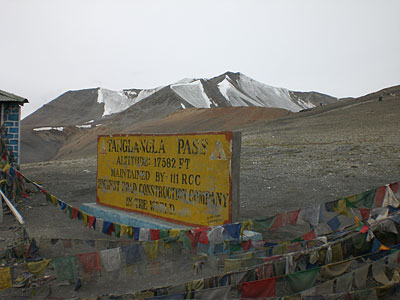 At 5 we set off. It's the beginning of the long Himalayan crossing, or rather part of the giant mountain range, since there are still very high mountains north of Leh. From Leh to Manali we must however cover 475 km on a road that crosses several passes of unheard-of height, among which the Tranlang La, the second highest pass in the world crossed by a motor road.

The weather is overcast today, a layer of clouds hide the sun, but I don't realise this before we stop at a village for breakfast, half an hour on the way. I feel very sleepy and in this lapse of time I have been keeping my head rested on the seat back in front of me in an attempt to prolong the night's rest. The seat is not uncomfortable, I must admit, in spite of not being covered by very soft padding.

We start the long ascent to the first pass, the highest one. The way that the road takes to gain height with reasonable grade is very long and exploits all the sides of the mountains. Since the space is plentiful, however, there are no narrow bends. We have a stop at the pass. Two women tie pieces of cloth to the many flags flying in the cold air of this extreme altitude. I can feel the elevation of 5,360 m in my body with a strange indefinable sensation.

We descend and halt at Pang where a few nomads' tents are pitched. I have a vegetable soup and meet an English girl travelling in my bus, named Jodie. There are also several Israelis, a few of them of funny looks. We go up the second pass, the Lachlung La at 5,060 m, by the way of beautiful gorges, then getting past rock towers and sand so warm-coloured that it reminds of the deserts of Arabia.

We keep driving miles and miles without finding a human settlement. I count the interminable sequence on the milestones: Sarchu 61, Sarchu 60, Sarchu 59, 58, 57... We proceed leaving weary miles of unsealed road behind. Time and again we cross iron bridges that our heavy vehicle makes clatter with a clang that deafens us, but is dispersed in the infinities of these spaces.

Eventually we get to Sarchu, where many of the vehicles halt in their transit from Leh to Manali as witness the camps of tents, but there isn't much else to be found. We have thus got into the State of Himachal-Pradesh. Slowly the landscape becomes greener, at first with lichens and grass, then with shrubs and trees. We have forgotten the cold bleak deserts of Ladakh.

We get at Darcha, that lies in a lovely location. To get down to this village in the bottom of the valley we had to drive on a small road at mid slope at a hair-raising height from the stream gurgling in the abyss. The slope was sheer and dived directly into the chasm. Like elsewhere along this route, but here in a particular way, we had to endure painful crossings with the innumerable heavy vehicles coming in the other direction. The buses, the cisterns, the lorries that victual Leh rub each other and skirt the crumbling road margin with their tyres as in a caress to Death. 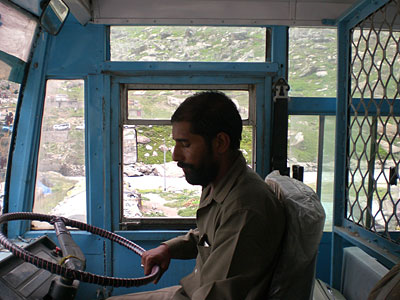 The driver has been driving with unbelievable skill and stamina, performing unthinkable stunts. Since 5 this morning he has been at the wheel, but neither for him nor for us does Darcha mark the end of the day. We have a brief halt, but soon we go on board again in the dim dusk light. It is quickly night, although the traffic in the opposite direction is not decreasing. We get to a point where three lorries have to get past us, but pressed as they are between the mountain side and our bus, they can't make it. Another tormented whistle manoeuvre then starts: the conductor - who doesn't drive, also because he's wearing ridiculous heel boots - gets down from the bus and sounds his whistle repeatedly to instruct the driver to recede a further 30 or 40 cm each time. He does so in several stages, then comes the long piercing stop whistle. In the night we have to retreat agonizingly by a stretch of ground to the disquieting sound of this whistle and give way to other vehicles.

It's still half an hour's drive before we get to Keylong. The entrance to the village takes place, as a worthy conclusion to this day, by means of another long whistle manoeuvre because the bend is too tight to be tackled in one go. It's 8.30 pm.