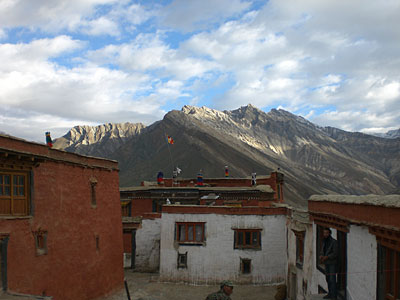 4 August - A sleepless night, literally. Wriggling and turning in my bed, breathing with difficulty because of a cold, a night of waiting, prelude to a day of waiting without a positive outcome. I had breakfast with Albert and when I talked to him about my plan of escape, he too was caught by a sudden fit to leave. An artist and a photographer, he's stuck here with flat camera batteries and is unable charge them.

So we have looked together for a car, stopping the very few that have passed by the yard to register at the police post and have a snack at the inns. The four people I travelled with yesterday got hold of the first vehicle, cramming into the back with their respective luggage. We stopped some French people of an organised group travelling in two jeeps, but we couldn't convince them. The young tour leader, who is looking for no trouble with the tour members, seems sympathetic, but then he says that if we wanted adventure, we must now bear the consequences. That's all very well, but we were just hoping for some solidarity...

Then came an Indian family, loaded in a jeep full to the brim, with even a cook. Finally some Italians that would have taken us, and I was ready to load my backpack and take a seat in the car, if only the driver hadn't started being fussy. Our insistence was not enough to make him change his mind. His flaccid passengers should have asserted themselves, but tentative as they were, they didn't show determination enough or have the awareness of being the ones who were hiring a driver. And curse him I did!

With subdued politeness, I'd also patiently put up with a long tirade - really out of place, there on the yard, while my only worry was to settle the practical details of the journey - when the man of the group indulged in an all-Italian show of culture on the local peoples. 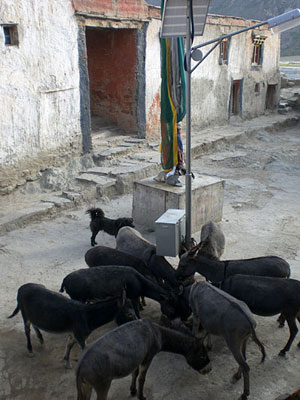 As from the early afternoon, past the hour when it's likely for some vehicle to come by, we decided to walk back to the monastery and spend the night there. They say a bus will come tomorrow, but I've heard talk of a bus ever since I was in Kargil and still haven't seen a trace. It will look like a mirage, if I see one. I'm afraid that tomorrow the same script as today will be played and I'll still find myself stuck here. If this happens, instead of going forward, I'll try to get back, with all my forces. I will even jump into someone's car and nobody will get me out. With the force of despair.

We left part of our luggage at the guesthouse in an Israeli biker's room and we set out on the vast gravely plain to the distant spot that is the monastery. We take the short way across the river, that we have to ford in several places, like some little monks coming home from school.

At the monastery only a few monks are left because most went to meet the Dalai Lama in the Nubra Valley. They offer us butter tea, and I feel nauseous at the memory of what I had to drink yesterday. On the contrary, when I cautiously try it, I find a nice taste to it and decide that I like it. With tea we're also given a bag full of tsampa flour, that one has to pinch between two fingers and throw it in the mouth, complementing with a sip of the drink, an act that must follow the first with great swiftness because the flour soon cakes up on the palate. From this room we observe the donkeys arrive one by one and crowd in the yard around a bowl from which they feed on tsampa, they too like us.

The isolation of Rangdum is extreme. In winter it's not reached by vehicles and helicopters never land even from the sky, as occasionally may happen in Zanskar in case of serious need. They say that last winter two people died without help or medical treatment, a three-year old child and a young woman. If any old monk is ailing, he is evacuated before the winter.

They give us a room overlooking the mouth of the valley through which the trekking route from the Kanji La descends invisibly. As usual there is a series of mattresses along the perimeter and in a closet aside, a clean squat toilet. I feel exhausted. As soon as I can, I throw myself into my bed, but shivers run over me and I feel hot. I take the tablets I have, expired 5 years ago, then reluctantly eat some of the rice with fried vegetables that our hosts bring to our room.