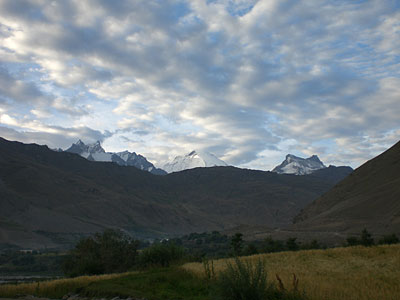 3 August - At 5.20 am I'm already waiting at the police post. It's cold and the still barely bright sky is crossed by long narrow streaks of cotton clouds. A car comes heading to Padum, with only two people on board. It stops, the policemen are still sleeping. The driver gets into the building, registers his only passenger. It's a French woman with long grey hair combed into two long Indian plaits. I tell her I'm also going to Padum and am waiting for a bus that maybe will never come. She doesn't make a sign to offer me help, nor do I go as far as to ask her for it and the car, once the formalities are over, drives off.

This is the first car, the one of my pride and my determination not to depend on others, not to feel hurt by a refusal if I stoop to ask for help, as if I could always be the stronger one that gives, and not the weaker one that has to receive.

After some time comes a second car, rather full to be true, again going to Padum. The driver comes down and when I ask for a lift, he puts out a request for 1,000 Rps in an arrogant way. This seems preposterous to me, but he's not willing to bargain. I talk with the policemen, who has meanwhile got up, and tell him to convince the other to go down a little. He then proposes 700 and I make a bid for 500, that I know is the right price. I think I would have accepted 700 too, if the driver hadn't started his vehicle in a fit and left like a boor.

I reflect once more. It's the second car, the one of my principles and the one of my dignity as a man that likes to be treated in a fair way and on a par, not like a stranger. It's the car of my aversion to come down to unreasonable compromises.

Later comes a lorry that will only go as far as Rangdum and asks 400 Rps for the journey, but I refuse. Third car.
The policemen invite me to go indoors. They offer me a blanket to warm up after the cold has got into my bones in the long wait. They also offer me hot tea, then a chocolate-coloured drink. When I bring the cup to my lips and taste, I recoil at an unexpected salty taste and think they must have confused salt for sugar by mistake. Instead of complaining, I wait for the others' reaction when they have their first sip after a few minutes. I see they don't cringe and I understand it's the famous salty butter tea, that I drink with resignation, feeling my mouth twitch at every sip. And no sooner have I finished my cup than I find it full to the brim again with a new ration that I feel obliged to gulp down.

While I despair of being able to get any further from this place, I walk some distance in the opposite direction from the village, towards the fields. It's now become a glorious day, a dazzling sun shines over the fields making their colours glimmer, while now behind the first mountains the two twin peaks tower splendidly, covered by a blue tinged snow that matches the deep blue sky.

At last comes a jeep, that is carrying locals but will stop only at Rangdum. The driver asks for the right price of 150 Rps and I accept satisfied. Four hours have passed in waiting since dawn this morning and I am finally on board, even if the destination is only half the way that yesterday I was hoping to cover. 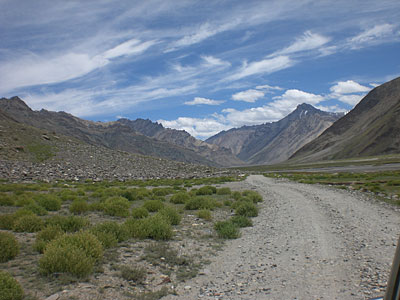 My travel companions are all Zanskar natives and will halt in Rangdum to resume the journey tomorrow with what vehicle they will find. The radio is playing nice Ladakhi music that stresses my mirth at finding what I was after: not just a car to go some distance, but a true experience to live next to the local people; not a car hired by a tourist, an ivory tower with four wheels that moves around above everything, only in search of a subject for the n-th shot, but an occasion to meet and become friends with someone.

My fellow travellers are four, two youngsters and an older couple. One is a student in Delhi and I can easily reckon that his journey home must last about a week. They are really amiable people and they offer me food to crunch, bananas, dried and fresh apricots, pieces of cake. This is the fourth car, the one of my salvation and realisation. In the name of sobriety and authenticity, as I like life to be, I discarded the previous opportunities, even if they would have been a more comfortable solution. But there's no point in musing over what was not: I must let myself be carried by this time wheel with abandonment, because all that will come will be connected from now on to all that preceded it.

The landscapes that we’re now crossing as we drive along the Suru Valley are varied and I am touched several times by the scenery before me. Green fields, marshes, a tremendously deep gouge in which the stream flows, then the huge glaciers that stretches with all its mass up to the bank opposite the road. It looks like an enormous pachyderm, because of the dark grey colour of the rubble that covers it and is cleft in several crevasses. We later find two more branches of the same glacier descending from different sides of the mountain, before we get to the spectacular Nun glacier at the base of the peak soaring sharp into the sky. The valley here is open and with a flat bottom occupied by marshes. We stop a few minutes to admire this view, while the police post attendant registers the data from my passport. 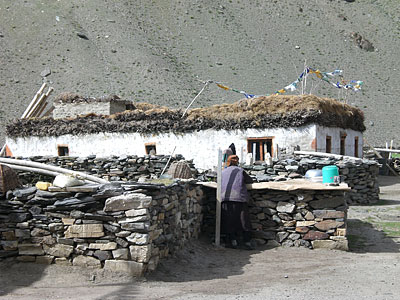 We get to a wide flat land with few scattered Tibetan-style houses: Rangdum. The people's facial features too have changed here, in this last village of the valley before the Penzi La. No more Suru Valley oval faces, but more round ones that vaguely remind of the Chinese type. This place is really bleak and at first I feel disappointed. It's wind beaten and cold. A huge gravel plain, without crops, closed in by a crown of mountains among which one stands out in the background, crossed by various warm colours in slanting streaks. In front of it one can glimpse a red spot on an isolated height in the distance: it's the monastery.

When I understand that now, at noon, there's no moving from here today, I take a room in a house with a flat roof covered by a layer of twigs, then walk off to the monastery. Today's driver, who's already going that way, takes me in his car, and I get on board with some regret for not gaining the space little by little and feel the fatigue of walking. 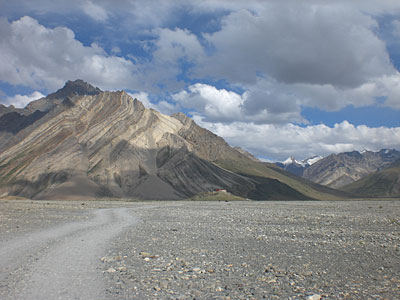 From above the knoll on which the monastery rises, one can admire that huge streaked mountain that had impressed me still from far away and that I now find of an upsetting beauty. In the oblique light of late afternoon it stands out with all its magic. The wide alluvial gravel plain too, furrowed by the rivulets in which water divides itself in the uncertainty of the flat bottom is fascinating, especially with light patches coming across the moving clouds, lighting this or that area like a spotlight on the stage. It's a place of mystical inspiration.

A prayer wheel comes to my mind, that turns and expresses the Buddhist concept of time in which every present event is eternal because it's connected to past and present by the threads of an infinite net of causes and effects. A time without an origin, nor an end, where every event derives from the ones preceding it and is the cause of future ones. Just as I can grasp from the eternity of this place.

A young monk shows me around the monastery, and offers me some tea. We then walk back together to the houses that a vastness separates from this place.

While I'm settling in my room, with the door open, an elderly Australian lady peeps in. She complains she can't stand the confusion brought by some Indian people, nor the dog barking ceaselessly in the house where she's staying. She asks for asylum and I tell her that she can stay and sleep on the cushions in one corner, while I'll use the opposite one. Space is not missing, in this nice luminous cosy room. She may sound peevish and is a bit bossy, but I'll help her out.

I spend the evening at the inn that has a cloth tent for a roof and an earth floor. I meet a Spanish guy, Albert, himself stuck here, but who's not in a hurry, considering that he'll stay in India four months more. I have some biscuits and tea - I couldn't cope with another dish of rice and beans. Then it gets dark, a dim lamp is lighted and we stay to talk.

Albert has to accompany me to my house with his torch, because it's got so dark that I wouldn't know which way to go. And even after he's left me in front of my door to go to his place, I get mixed up and try to break into the neighbour's house, in spite of the house mistress beckoning on the balcony and shouting something at me. I end up straight into the sheep pen.

But also once I've got home, I'm in for a new scene. The bathroom is like the one I saw at the monastery, that is two holes in the floor. To be true the reason for this dualism is unclear to me and I am perplexed as to which one to use. There's no running water, no electricity. I bring therefore a candle, but a deeper breath of mine blows it out... I have a fit of solitary laughter and have to grope out of the bathroom to my room.