1 August - I couldn't help featuring the dream of the night before departure but with images of a jeep crashing down the mountain side with my friend Doris inside. When I rush down to the wreck to rescue her I realise she isn't hurt in the least. Quite the contrary, she takes me into her car and starts driving at an exorbitant speed to chase another car, to my great fright... They knock on the door and the dream vanishes. It's 6.15; my sleep was so sound that I get up to answer the bathroom door, instead of the room door. 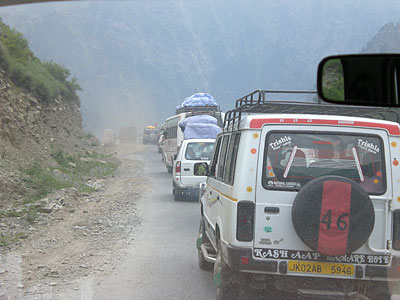 At 7.20 we set off: I'm comfortably seated on the jeep's back seat. Once out of the city we cross bright green meadows of young grass or corn that shine even in this clouded day. Thick woods border on them. We soon find ourselves in a line of moving vehicles, tens and tens of jeeps and a few buses proceeding towards the mountains. In the opposite direction few lorries are coming down. Our driver makes himself guilty of some reckless overtakings just to advance by a few positions in the convoy.

The military are everywhere along the road, also with roadblocks and camps. I am told that all the crowd is because of the Hindu pilgrimage, or yatra, that takes place in this month to the frozen lingam of Sri Amarnath, symbol of the God Shiva. The place can be reached by two ways, but the Baltal branch, that is ours, is shorter. For all that, it still entails a couple of days' walking at high altitude to reach the 3,888 m of the cave. The CRPF military corps have set up centres for medical assistance and with the massive presence of soldiers protect the pilgrims, as apparently there was a blast some time ago.

We drive along a swollen foamy stream with forests of tall pine-trees that skirt it with their dark green. From time to time boys charge us a few rupees' toll on the road.

At 10 we are in Sonamarg and have a break. We are already at an altitude of 3,000 m and I can sight the first glacier (I had previously seen snow drifts). I buy two apples to munch from a smiling ruddy guy wrapped in a flannel tunic.

We hit the road again and part from the bulk of cars heading to Baltal to follow the ominous sign to Zoji La. As I open the water bottle I can fell a slight pressure blowing out because of the altitude we have gained. The road becomes bad, the asphalt gives way to a grey sharp grit and we rise in narrow bends in sheer drop on the valley.

At one blind curve we are confronted with a surprise that makes everybody utter a cry: we see a descending biker lose control of his vehicle, skid on the grit and fall from the saddle on the road margin. The bike rumbles down alone by inertia until it sticks between the jeep's front wheels. The man gets up and comes to recover his bike, while we have stopped. He's a foreigner and doesn't look hurt, although it must hardly have been a pleasure.

At 11.20 we are at the pass. I'm nearly disappointed at not feeling a bit of fear on this road, although I admit that danger was present and lurking. Every year accidents occur on this stretch and when a vehicle is involved that carries several people, casualties are heavy. The roadway looked spacious in comparison with what I had imagined; it is unequivocal, though, that such a steep and rough road surface is treacherous.

Over the pass, the trees disappear and only moss and grass remain. The stream now flowing alongside the road is of a dull grey, glacier thaw water. We halt shortly at Drass where we can see Tiger Hill, a peak that provided the scene to the 1999 war between India and Pakistan and was conquered back with difficulty.

The Line of Control runs at a short distance behind this village. The jeep boys are almost more excited than me to be at the far end of their country and in the close vicinity of the enemy, barring for its religious faith, and point repeatedly out to me the direction of Pakistan up the stream-gouged valleys. We drive past the war memorial, then follow an interesting narrow V-shaped valley, very stony. At times the road rises over the stream, now of a greyish blue, but is constantly narrow. The crossings with other vehicles are all critical manoeuvres.
I see the road signs of a macabre humour courtesy of the Border Roads Organisation (BRO) in charge of building and maintaining these roads: "Don't be rash, or else you will crash", "Drive slower, live longer", "Arrive at home in peace, not in pieces". 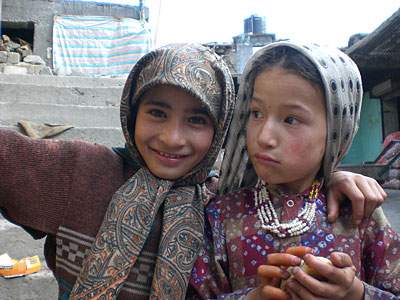 Kargil is a Shia Muslim town of passage, disputed between the two enemies in their several confrontations and shelled in the last conflict of 1999, when Pakistani militants trespassed across the Line of Control taking advantage of an early thaw to seize hold of the Leh highway. I find a room at the Tourism Board guesthouse, frequented by local workers. The faces are elegant, the cheeks sometimes slightly ruddy.
I enquire about going into Zanskar tomorrow and after a series of consultations conclude that I can go by bus up to a point, but I'll have to make good of whatever I'll find after that. With a bit of good luck, they say I should make it.

I run into the Taiwanese guy I met on the way from Srinagar and we have dinner together. I expose my scheme of going up the valley by public transport, but he deems it a crazy idea. I have now an altitude headache, in spite of the Diamox I've been taking, and it thumps at the temples, especially when I stoop. I need a good night's rest, even if it will be shortened by the early bus time tomorrow, between 6 and 7. As I couldn't well understand the exact departure time, I'll be bound to attend as near as possible to 6. But in order to be sure to wake up, I buy an alarm-clock, a device I will use on several other occasions on this journey marked by starts at dawn.