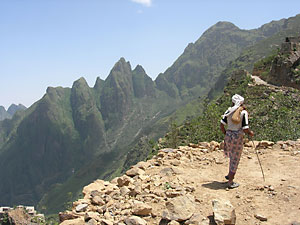 27 April – As could be expected, immediately we opened the door this morning several children rushed in to observe us, then some adults too, among whom the one who was to turn into the day’s nightmare. This man, muttering some words of English, says he wants to take us to his house; he wants to hold us for lunch too. We excuse ourselves, we are in a hurry, Sarah has to take a plane at 6 pm at Sanaa. We cannot afford to tarry and forget our plan. But it's no use. He displays a blind and reasonless insistence without precedent. He says it’ll last just "one hours", betraying his real intention in the grammar mistake.

The girls are annoyed and answer in Arabic to his insistence in English, thus underlining the fracture on the level of communication. They seem to be on the verge of an outbreak for exasperation. I try to retain them, as it would be bad to betray the hospitality received. But his insistence is dauntless, does not know reasons and turns into gross impoliteness. We suspect this attitude has to do with injured pride, above all in front of his village folk, or maybe the thought we may be scared of his people, which stops us from accepting his offers.

We have no more words to say. Dispensing smiles and handshakes I follow the girls  that have already dashed forward. It’s been such a hasty start that we neglected those who had kindly received us.

The group headed by the English-speaking man is still following us and keeps shouting to go up to the village. We are way below now, but still hear his voice shout to stay. Just a nightmare…

We reflect a long time over the incident. We are sorry we couldn’t take a proper leave from those who had invited us. But so much more I know we have disappointed everyone’s expectations, particularly when a child who is coming down with us tells me: “You didn't feel at your ease with us, otherwise you’d have stayed”. I clearly explain the situation to him, but there is a cultural problem at the base, something that concerns the conception of time, of a date, of haste, of hospitality, of the unclear concept of a trek in the mountain…

We get down to Rishe’s three houses and from here we trail on in the bottom of the valley that gradually falls into an increasingly stronger heat and sun. We arrive exhausted at a village that we are convinced is the beginning of the tarmac road. But that’s not so. We have to stop in the shade to drink and while we are resting a few faces crop up at the windows and invite us to get near the houses.

A handsome woman with beautiful features, a perfect nose, pitch-black eyes and a headscarf tells us to sit on her threshold. It’s impossible for her to receive a stranger man inside the house, but anyhow we are in the shade. She insists on us eating something. She brings us, there outside her main door, a delicious Friday meal of rice, mlukhiyye, boiled meat, rocket and bamia, all sorts of good things. In the meantime she converses from inside her door and also asks the girls questions about me, that I answer directly.

We reflect on the beauty of this act of profound hospitality, while in our countries individualism makes modern man live nearly exclusively for himself. Whoever in Europe would be afraid to be exposed to the risk of ridicule or to people’s judgement, in showing such a spontaneity and attention to a stranger’s needs; or they would call on a vague sense of danger in receiving someone unknown from the street. Here on the contrary it’s a duty and at the same time an honour to receive.

At home many would quantify the monetary expenditure, not because we’re all stingy in Europe, but because we tend to measure even our value as people in terms of money. If someone swindls me out of money, they attempt at my honour; if I earn less than you, I feel inferior; the more wealth I can show off, the more I consolidate my social position; if I have earned at the stock exchange, I have realised myself; if I have made a bad bargain, I am disappointed… we don't understand that at heart it's only money, only money, nothing next to life!

We take a car to Hanake and reach the tarmac road. While we're waiting for transport to Mahwit at least 15 children between older and younger, sit in a row to observe us, without getting tired. To go to Mahwit we choose to stand in the box to admire as much as possible the vast and changing landscape that we view form a ridge to the next.

Before getting to the end of the long drive, it starts pouring cats and dogs. We have to get into the cabin close to each other and at a later time we take in the already drenched backpacks too, in order not to spoil our documents.

We take a car to Sanaa. Sarah has no chance to take her flight tonight. I take out my sleeping bag and we cuddle under it in search of some warmth since we are all a bit wet and cold. I get off at Tawila and let the girls go on. I take a room in the poor hotel with a bathroom but no running water. Compared to last night it's always a bathroom and I wash myself somehow with the cold water of a saucepan.v