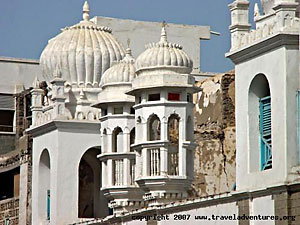 19 April – We go to the French cultural centre and I see Sarah's workplace. She is manager of the Aden centre and is happy with her recent position. I check my mail and then towards noon I take a bus into town and stroll around the central streets and shops. The sun is very hot. Several buildings are made of stone and probably date back to the colonial period, the golden age of the port of Aden. It's a peculiar town, lying on trading routes that were once strategic, and even now it retains some importance, though its haven has a slack traffic for several reasons, among which acts of terrorism that were carried out in its docks and targeted American and French interests. I notice people of different origins and its history is fascinating, its very natural volcanic configuration jutting out into the sea compensate for the lack of outstanding tourist attractions.

I sit at a bar for a fruit shake and a sailor insists on talking to me from a nearby table in an impertinent way. He's plump, even in the face and wears rectangular smoked spectacles. I could see him as a character of a sea novel by Conrad. Without restraint he persistently sticks his fingers up his nostrils and asks me cheeky questions, I wouldn't object to answering if only he would answer mine, for instance from what country he is, but he seems to be playing riddles. He speaks English with an Indian accent, but he may be an Arab. A beggar comes up and with an irritated and comical tone this character enjoins me to drive him away. I ignore this further instance of impoliteness, but I'm really annoyed and hint I don't want to pursue this indisposing conversation: I pretend to delve into reading, and only later I exchange a few words with a dad and his son sitting at my table.

At 2 pm I meet Sarah. We buy a fish at the market and have it grilled in a restaurant. We then take a walk around the shops and when Sarah goes back to work I take a bus to another part of the city, the port of Mu’alla. You can see the immense natural pool enclosed by the arms and flanks of volcanic mountains reaching into the sea.

I return to Aden, and call by the cultural centre then go home with Sarah. Tonight she’s invited to a wedding, the women's reception that is, so she’ll go to the party alone. She’s very undecided about what to wear; should she observe the local etiquette that would have her cloaked in the crimson velvet robe that a colleague lent her, or rather be herself and wear one of her dresses at the risk of not having an appropriate outfit? I stay at home alone a few hours, but around 11 pm I hear the bell ring. It’s Sarah. She tells me disappointedly that the men got home much earlier than expected and the women’s party had to disperse in a hurry. She wasn’t able to take part in the dances as she wanted. We stay up till late talking.

20 April – We have decided to go to Fuqum today, a fishermen’s village where a French anthropology student stayed a few months (incidentally I had met him in Damascus). Geraldine came to see him some time ago and met his hosts. She gave me their address to visit them, saying they are exquisite people. 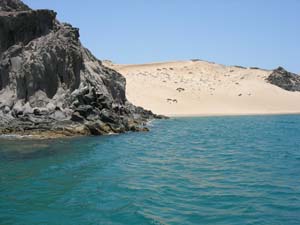 We bought a roast chicken and some fruit to eat, when we passed through Sheikh Othman before taking the taxi to the sea. On arriving we spend some time in the house, then get into a fishing boat that takes us to a beautiful desert beach where the golden sand rises from the water’s edge and forms a high steep dune. Not a soul except few people at the opposite end of the beach.

At 2 pm the eldest son, Rashidi, comes to pick us up in the boat and takes us to a volcanic islet under which opens a pretty cavern level with the sea. We dive into the water and swim. They say you can reach another cavity in the rock if you swim under water. I hesitate, but have to undergo this trial keeping my eyes open in order not to bump into an obstacle. Finally I emerge in a narrow tunnel. I surface with my head to breathe, but the air is humid and heavy. I can’t wait to get out of there.

We then moor on the side of the islet and climb to the top. We can see an all-round panorama in a terribly bright sunlight that reflects on the sea, making it look metallic. We sail back to the humble village, where the houses are simple buildings close to one another, made of cement blocks, mended in some way or other, sometimes with roofless rooms. Rashidi’s father tells me of his trip around Europe when he was a student in Libya. He’s educated and very up-dated, and his son took this curiosity after him. We stay a long time, then we are invited to call at other houses that we reach threading our way along narrow passages between the houses, invaded by sand, rubbish and pipes; at some spots I can smell urine. We get into a last house and we understand they want to keep us for dinner.

We have a good meal, with fish of course, serene in our friends’ relaxed company. The women appear to be much less segregated than elsewhere, they have merged with the men and with me for dinner and have an uncovered face. I am struck by a young woman’s beauty, whose traits are nearly Indian. She wears a headscarf and asks me some questions in a natural way. The relationship seems very normal. We go back by shared taxi. At home we stay up to talk until late.