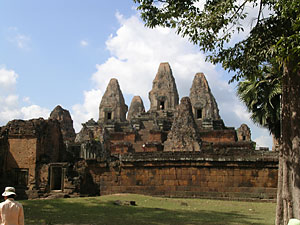 29 November – I have started visiting Angkor temples, the huge area dotted with myriad temples as old as 1000 years on the verge between the tourist town that has recently boomed and the jungle that kept them submerged for ages and constantly threatens to take them back. This imposing and looming presence of powerful nature is the most fascinating feature of the temples and scales down the blatantly commercial and touristy character of the town that in a few years' time has become the third largest in the country. All the temples are steeped and surrounded by a garden of elegant and centuries-old trees with tall and stalwart trunks. Some buildings are literally superimposed by these vegetal beings in a defying embrace between carved stones and the wooden parts that strangle them and look as if they were sculpted themselves by the hand of an extraordinary mason. You cannot know which one will gain the upper hand. Some of the wood appears to have been shaped by time and produces interesting as well as surprising shapes that could well be petrified veils. The stones witness to their old age by the colour that they have taken, the lichens and the mosses that have clad them, their very disposition in heaps or stacks caused by crashes that man's hands didn't want or were not able to fix.

Unknown insects give out chirps, a loud metallic buzz, piercing and continuous, with the might of a mechanical siren. You would think you are going deaf after being engrossed and vaguely on the look-out as if warning sirens were ringing. But eventually it is bewilderment that wins in front of this phenomenon.On the terrace of the guest-house where I am lodged, a deafening buzz sets out at night that I thought came from a badly lubricated fan. I was forever cursing the indolent hotel staff that didn't bother to fix the problem. However on the third night, while I was trying to carry on my reading in the annoying shrill creaking, I saw a waitress move a flower pot and the torment ceased. I couldn't believe it! Still incredulous I personally made sure, but there was no doubt: it was a cricket! 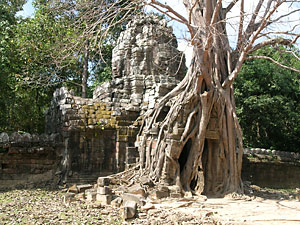 By the way, I remember that while I was visiting the temples this morning, I fancied eating the raisin roll that I had bought for a snack. As I chewed it, I felt something hard that instinctively blocked the movement of my jaw so as to carry on more warily. All of a sudden I felt a sharp pain in my tongue and I thought I had found a thorn; but actually I had been stung by an unknown insect that I refused to identify, only hoping that no allergic reaction would ensue the painful bite.1 December – I have got to the third full day visiting the temples. I have seen the main ones, but the list would still be long; I have not got bored of this experience, which on the contrary has been quite interesting. On top of the forms of a prodigious nature, so unusual to me, comes the astonishing building style with unthinkable proportions in height and width. Many reproduce the holy mountain Meru, so the climb to the upper terrace was made purposely difficult with very short but dreadfully high steps. Both from below and above, the flight of stairs looks like a vertical wall. If you add the frequently eroded state the stone is in, you can deduce that the climb is often dangerous too.

Climbing however allows not only challenging one's courage, but also realising the dimensions of the building. In the main Angkor Wat temple the upper terrace, at I don't know what height, could easily be a temple on its own for its dimensions. You then have the fascinating Ta Prom temple left to the jungle, that was only partially removed, but not the most imposing trees that still wrap the building elements with their incredible roots in a peculiar unity. 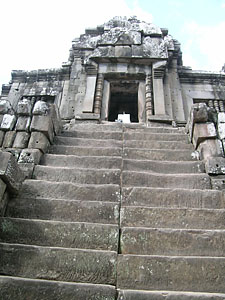 Today I have also had a trip in a tuktuk to the far away Banteay Srei temple, very refined for its carvings and therefore worth the hour's journey from the town. Apart from the destination, the trip was equally worth having. As I drove amid rice paddies interspersed with elegant palm trees, I crossed through villages where daily life was caught at the moment of my passage: children in uniform cycling to school, peasants working in the rice fields, brick and earth ovens rising in the middle of yards. A long log is gradually pushed in through the opening, level with the ground, to burn and heat the big steaming cauldron placed on top. Many stalls line the carriageway; some offer cylinders of woven leaves containing cooked palm sugar tablets, very tasty home candies.An electoral meeting is in progress and I find it again on my way back in the middle of the more festive part for the stomachs. Along the roads there are plenty of propaganda signs for the three political parties that vie each other in the elections and were sadly confronted in the long and ghastly years of recent Cambodian history. The signs merely bear the party name without any other graphic element, in white, somewhat faded lettering on a bluish background. Of all stands out for its frequency the communist Cambodia People's Party.

I was reading the pages on the historical background last night and realised how much suffering was inflicted on this people during the cold war years for the central powers, but so hot for those on the outskirts.The scope of these sad happenings was such that until a few years ago these very places were off limits, a stronghold of the terrible Khmer Rouge and their militias drafted in the countryside.